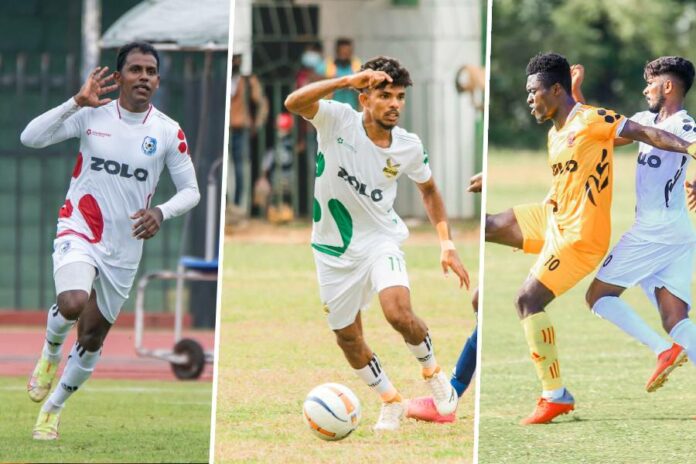 Serendib fought hard to earn a 3-2 win against a determined New Star outfit at the Sugathadasa Stadium.

Evans Asante gave a 2-0 lead to Serendib – a penalty in the 11th and a long range effort in the 14th minutes – early on before Mohamed Anas pulled a goal back for New Star in the 17th minute. New Star dominated the game thereafter and could have equalized if not for Chameera Krishantha’s wayward penalty.

Serendib got some breathing space with their 3rd goal in the 75th minute through Mohamed Issadeen who finished off a wonderful link-up play with Evans. Substitute Ahamed Adil made it 3-2 for New Star in the 84th minute but equalizing third goal eluded them.

Matara City made it two wins in two matches defeating Police 3-2 at the Kotawila Grounds in Matara.

Boadu Prince scored in the 20th minute for Matara before Nabeel Sudar equalized for Police in the 33rd minute. Keshan Duminda made it 2-1 for Matara in the 59th minute and an own goal from Hashika Navoda in the 62nd minute gave them a 3-1 lead and atwo goal cushion. Anthony Thanujan pulled a goal back for Police in the 68th minute but they were not able to find the third.

SLTB bounced back from the week 1 loss to Moragasmulla to secure a tight 1-0 win over St. Mary’s at the Maligapitiya Ground, Kurunegala.

St. Mary’s were coming off a 4-0 loss to Serendib last week and their misery continued with SLTB’s Sivaraja Krishanthan scoring the only goal of the match in the 55th minute.

Super Sun defeated Saunders 2-1 at the District Sports Complex in Galle. Saunders took the early lead in the 10th minute through Pathum Gimhana. Hasitha Priyankara equalized for Super Sun in the 26th minute and 10 minutes later in the 36th minute an own goal from Indreewa Udara proved to be the winner for Super Sun.

Crystal Palace and Pelicans played out a 1-1 draw at the Bogambara Stadium in Kandy. Rajikumar Shanthan scored in the 8th minute for Pelicans but in the 75th minute Ibrahim Jimoh found the equalizer for Crystal Palace.