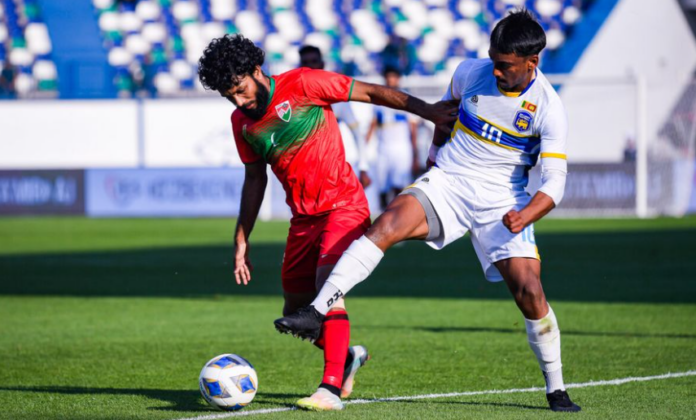 Maldives ended their AFC Asian Cup 2023 Qualifiers Final Round Group C campaign on a winning note with a 1-0 defeat of Sri Lanka at the Markaziy Stadium in Namangan, Uzbekistan.

Hamza Mohamed scored the only goal of the game to earn Maldives their first victory to finish third ahead of Sri Lanka. Having suffered two consecutive defeats against Uzbekistan and Thailand, both South Asian sides were eyeing the first win of their qualifying campaign.

Maldives fielded a defensive line-up with Naiz Hassan playing as a lone striker, while Sri Lanka went with an attacking trio of Mohamed Aakib, Mohamed Fazal and Dillon De Silva.

Despite their best efforts, Sri Lanka were unable to break down the Maldivian defence as the score remained 0-0 going into the break.

In an effort to find the breakthrough, Francesco Moriero substituted Hassan Naiz for Ibrahim Hassan in the 56th minute and it was not long before Maldives found the back of the net.

Ibrahim Hassan was in the thick of action, creating the chance for Ibrahim Mahudhee to send a clever ball through to Hamza, who slotted home the opener through the legs of Sri Lanka keeper Kaveesh Fernando.