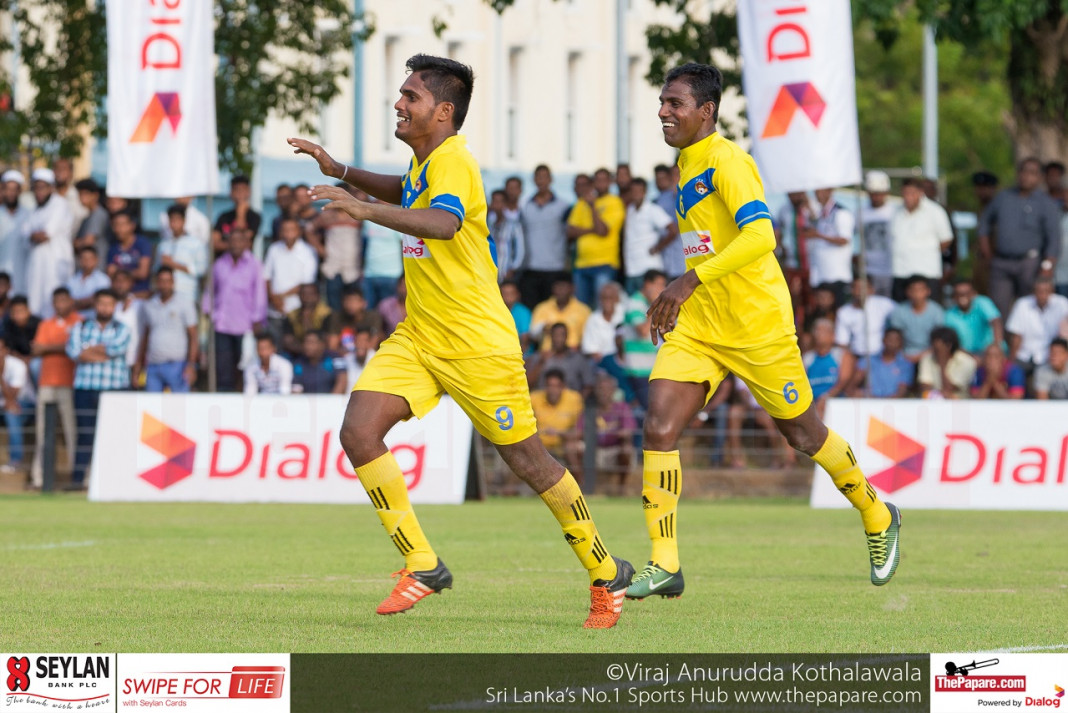 Blue Star SC saw their Championship hopes ripped into pieces after a marauding Army SC stormed to a 7-3 win in a 10-goal thriller at the 2016 Dialog Champions League Finale held at the Race Course International Stadium.

Blue Star roared to a 1-0 win against Colombo FC in the battle of the unbeaten in the previous week while Army SC put 7 past Solid SC to make it 12 goals from their last two matches.

The vociferous Blue Star fans were stunned into silence and the players in shock as Army buried their championship ambitions scoring four goals within the first 23 minutes.

The game started off in scintillating fashion with the deadlock being broken as early as the 5th minute when Mohamed Issadeen popped up at the right place to nick the opener past goalkeeper Manjula Fernando. Madushan de Silva put in a scrumptious cross from the left after getting the better of Fahir Ali to provide Issadeen the opportunity.

Shortly after, Army earned a penalty after Sanka Danushka intercepted play and released Sajith Kumara who was brought down in the box thanks to a lazy challenge by Nasiru Opayemi. Issadeen again stepped up to take charge and fired his effort into the left top corner.

The Soldiers made it 3-0 in the 21st minute when Madushan De Silva’s cross ricocheted off of Balgamage Shivanka and fell to Sajith Kumara who made no mistake in the thundering his effort into the Blue Star net.

Army then made it 4-0 in the 23rd minute when Kumara again popped up to nod past custodian Fernando who stopped on the way to the ball but due to the uneven pitch, the ball hung up giving Kumara just enough time sneak in and head home.

Blue Star did go into the interval with some hope when Idowu Hameed netted a consolation goal fifteen minutes before the interval, and could have pulled one or two goals back with E.B.Channa going close with a free-kick.

The second half started in equally competitive fashion. Blue Star, buoyed by the massive support they enjoyed, looked like a different team to the side they were in the first half as they bossed the initial exchanges.

Mohamed Najeeb popped into the middle of the box when a free kick came in from the right side to put him in a threatening position. From there, the little midfielder helped the ball into the back of the net to put Blue Star on the ascendency.

Blue Star SC managed to take down defending champions Colombo FC by 1-0 in the 2nd half continuation to keep title hope alive in the DCL Super 8 week 6..

After about a quarter of an hour of end to end football, the Soldiers responded by scoring their fifth goal in the 62nd minute when Madushan De Silva was found via a smart Issadeen pass to slot past the on rushing goalkeeper.

With ten minutes left, Blue Star toiled to make the score line somewhat respectable, but in the process left themselves bare at the back. As Army countered and put a dangerous ball across the goal in the 85th minute, Shivanka was unfortunate to put it into his own net, adding more insult to injury.

As the game drew to a close, Army added one more in added time as Issadeen completed his hattrick by turning in a header on the volley while E.B.Channa scored a deserved goal up at the other end for Blue Star to wrap up proceedings.