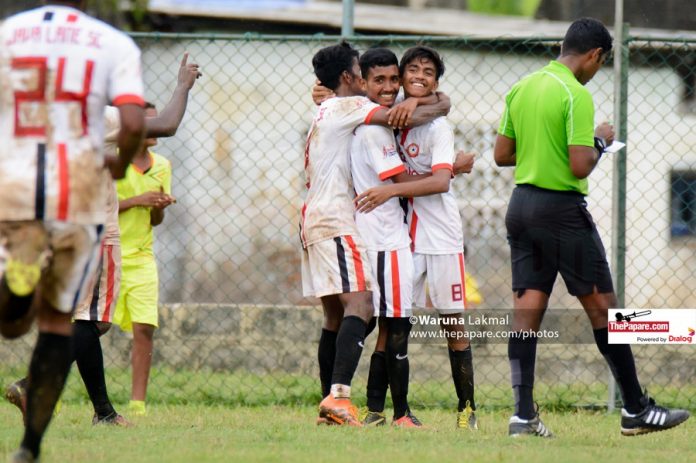 Java Lane scored in the dying minutes to beat Matara City 1-0 to survive another season in the DCL. Dialog Champions League 2018 match week 17 fixture which was played at Kelaniya Football Complex.

Matara City, the giant killers who beat Blue Star and Sea Hawks to deny them the opportunity to win the DCL title, came into the game looking to deny Java Lane the possibility of staying in the DCL. Java Lane on the other hand made a revival of their troubles and were awarded with an advantage as the game was switched from Matara to Kelaniya.

Game got kicked off in the scorching heat and Java Lane looked to pile on the heat on Matara City with some early attacking moves. Malaka Perera, Naveen Jude and Mohamed Abdullah looked sharp along with Mohamed Rishan on the left wing.

Java Lane were guilty of too many missed passes from the mid field to their forwards giving Matara City breakaway opportunities. Issac Adavu got the first shot on target after a free kick was awarded in the mid field. Dammika Senarath saved well to deny Issac.

Larbi Prince then found space behind the Java Lane defence from the high ball and a thundering effort came off the cross bar as Dammika Senarath was beaten.

Matara City started their domination with procession and looked more threatening with Larbi Prince once again getting a shot away for Senarath to save.

Just before the break Prince was once again through and his shot this time around went high and wide as both teams headed to the hut with scores level.

The second started with Matara City attacking and the two Princes Larbi and Boadu combined early to create an opening. Larbi Price was unable to keep his shot low after Boadu crossed after some nifty footwork.

The first clear opportunity for Java Lane came from Naveen Jude when his shot which was on target was deflected away by the Matara defence. Ball fell to Jude after a partial clearance from the goal keeper Chawla Udayanga.

Both teams struggled to create clear cut opportunities as the clocked ticked in favour of Java Lane SC. Mohamed Abdullah got a half chance at the hour mark from a Malaka Perera cross which he headed wide from distance.

Mohamed Abdullah once again got an opportunity this time choosing the wrong option of passing rather taking a shot as he was with space and time. Ball sailed wide away as no Java Lane player was close to the ball.

As the long whistle approached Java Lane was in the ascendency with several attacking moves which  fell short of execution. The survival goal came at stoppage when Francis headed home a corner to send the Java Lane fans to ecstasy.