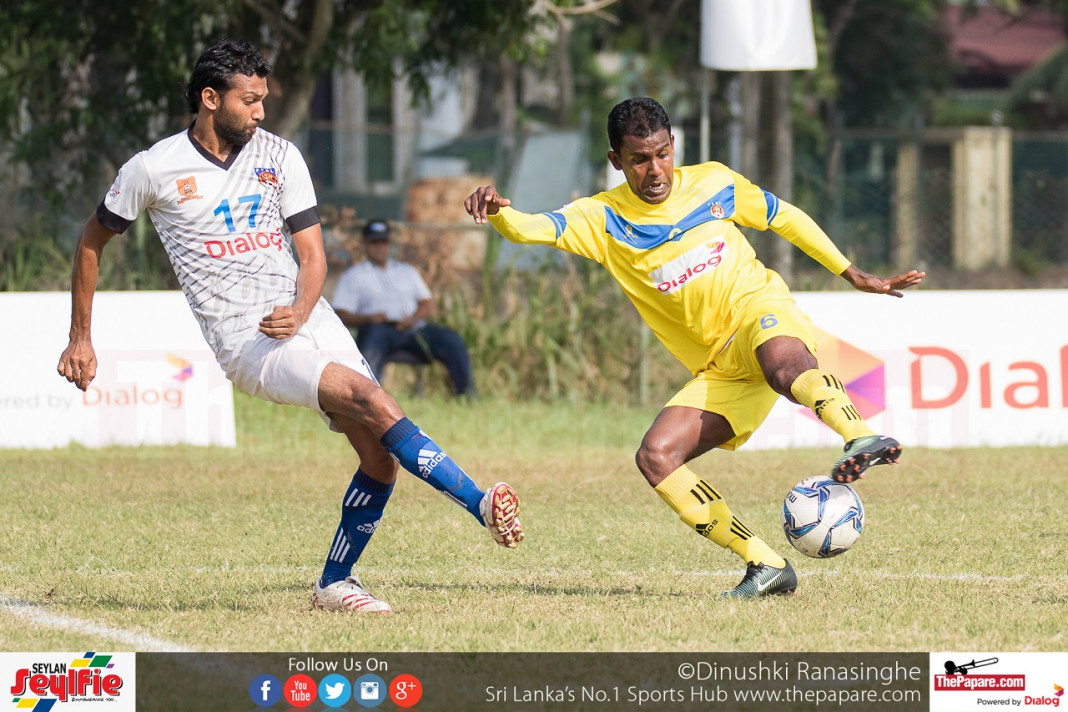 Army SC subjugated Solid SC to a humiliating 7-0 defeat in the first match of 2016 Dialog Champions League Super 8 Week 6 worked off at the Kelaniya Football Complex.

The soldiers were on the winners list from last week where they thumped New Youngs FC 5-0 while Solid SC had to face a 2-0 defeat at the hands of Blue Star SC after a hard fought game.

The first half was a goal fest directly from the beginning with Madushan De Silva of Army SC being the first to get on the score card.

Army thump New Youngs in a second half rampage

Army SC hammered in a five star performance to win by a 5-0 score-line against New Youngs SC in a Dialog Champions League Super 8..

Poor defensive play from the Solid SC lads saw Army scoring two more goals bringing up the lead to 3-0 by the 30th minute.

A few minutes later Amith Kumara of Blue Star SC tried his luck from range trying to narrow the gap, however the shot lacked both power and direction as it crawled out for a goal kick.

Army SC went on to dominate the rest of the half pinning Solid SC in their own half while Mohamed Issadeen scored two more goals in quick succession to complete his hat-trick taking his team into half time with mammoth 5-0 lead.

Madushan De Silva kicked off the second half in style drilling in his 2nd goal of the day in the 47th minute.

Despite the flurry of shots coming from Issadeen, De Silva and Mohammed Rimzan, Solid SC custodian Mohamed Ishan stood his ground and put up a better show than the first half pulling up some finger tip saves to keep his team from conceding anymore goals.

Blue Star were made to work hard for 3 points against a makeshift Solid SC as they sealed an important 2-0 win at the Kelaniya Football..

Throughout the rest of the 2nd half whatever effort Solid SC put up to gain some control of the game turned futile as Army SC showed no signs of letting go, consistently pushing their opponents into a whole new world of misery.

Substitute Tharindu Danushka finished off the match with a goal of his own demolishing Solid SC by a staggering score line of 7-0.

This is certainly an evening Solid SC would wish to forget but the match would most definitely go into the record books and be remembered by many for a long time.

“We didn’t come here for a result. Due to the inconvenience the FFSL has caused us with the postponing of the tournament we’ve lost players. The forces and the rich Colombo clubs have the means to sustain themselves unlike us. We travel the furthest and we have to find those fairs and resources. We already lost Tunde and Abumere was convinced to stay. After a bright start we faded away this year and the FFSL is solely responsible with their unprofessional organizing.”

“I’m happy with the number of goals we scored despite resting crucial players from the line up. I have mold these players to a style of play and it’s good to see how they’ve come through. I will probably retire come the end of this year from the Army and I have no intentions as of this moment to continue coaching. But when I leave I will be a happy man as for the service I have done for this team.”