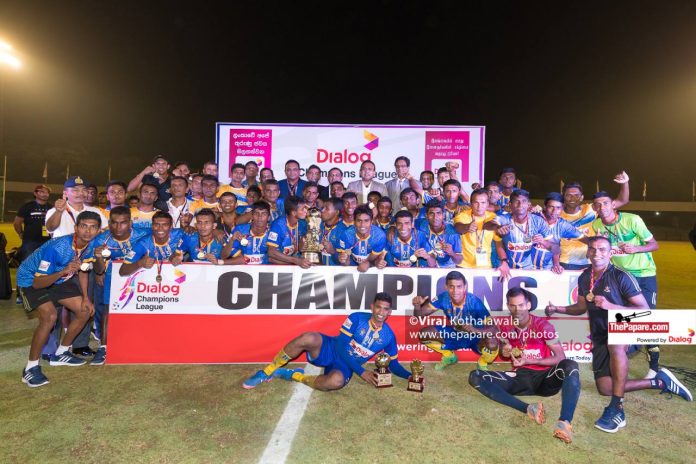 Defenders FC put on a masterclass in counter-attacking football as they beat a resilient Blue Star team in the Dialog Champions League 2018 match week 17 and the title deciding fixture played at Sugathadasa Stadium Colombo.

Colombo FC completely outplayed Sea Hawks with a second half blitz in the..

The two teams walked out to the field with the ambition of being crowned the Dialog Champions League 2018 Champions. Defenders needed to win whereas Blue Star SC only needed a draw to lift the DCL Trophy.

Right from the kickoff Defenders went on a rampage and attacked with some fast paced football. Mohamed Issadeen looked sharp in the opening stages with some threatening movements.

In the 2nd minute of the game Issadeen gave the Defenders the perfect start with a brilliantly taken shot to the far post off a free kick.

Blue Star almost equalized immediately after the restart only to be denied by Mohamed Luthfi. It was end to end stuff as Asikur Rahuman got Manjula Fernando to work with a low drive from the left which he dealt with with his feet.

Despite scoring early, the Soldiers did not looked settled as Blue Star threatened their defenses and made life difficult for the back line.

Mohamed Issadeen missed a sitter mid way through the first half, a free header which came his way from an excellent cross from Kamaleswaran Kajanthan. With no challenge on him, he headed wide, not even troubling the keeper Manjula Fernando.

The Blues looked a much better team with some excellent passing and movements as Defenders had no answer in repelling the attacks coming their way.

Asikura Rahuman then made a brilliant run and with a bit of help from the Blue Star defense, shot past the on rushing Manjula Fernando to double the lead for Defenders FC.

Blues Star got a goal back just before the break when EB Channa headed home a cross ball from B.C Sampath. The Defenders initially cleared the long throw in but couldn’t deal with the second ball.

Blue Star started the second half brightly and threatened the Defenders’ goal with the first moment but Mohamed Najman couldn’t keep his shot on target after a cross from the left found him free inside the box.

Defenders slowed the pace of the game from the start of the second half. The game was a stop start affair early on as Defenders delt some hard tackles. Eranga Priyanshantha was substituted by Kasun Pradeep due to an injury.

At the hour mark Blue Star were still on the front foot with the attacking play and Defenders were left to counter which they couldn’t execute due to poor decision making in the final third.

The long throw in ploy was very effective for Blue Star as they kept Mohamed Luthfi busy in goal for Defenders.

E.B Channa then hit the upright with a well taken free kick from just outside the box as Blue Star lifted the tempo of the game and Defenders looked for answers to thwart the attacks.

With 10 minutes left on the clock, Asikur Rahuman restored the 2 goal cushion for the Defenders , against the run of play, with a brilliant run and a thundering finish.

Defenders mustered up all their experience to play off the remaining minutes plus the added time to clinch the Dialog Champions League 2018 with 34 points.