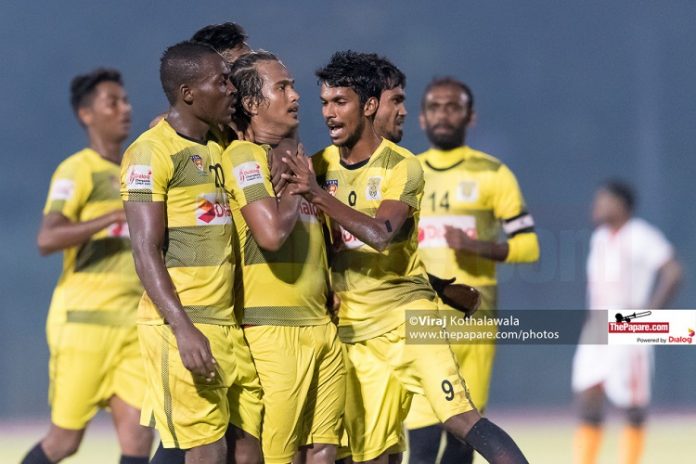 Colombo FC completely outplayed Sea Hawks with a second half blitz in the Dialog Champions League 2018 match week 17 and the final fixture for both teams played at Sugathadasa Stadium Colombo.

Despite this, stakes were still high as one of the two could still finish as the runner-up in the DCL and carry bragging rights.

From the start both teams struggled to get a foothold in the game. Both teams lacked enthusiasm as play continued at a lethargic pace.

Colombo FC had the better of possession, however they were unable to create any clear cut opportunities.

Midway through the first half Momas Yapo thought he gave the lead to the Colombo team, but referee Dilan blew for offside as Yapo was slightly ahead of the Sea Hawks defender.

The second half too took the same path as the first as both teams created very few opportunities to trouble the goalkeepers. Mohamed Asmeer had an early opening however he shot high and wide.

Colombo Coach Roomy brought in Zarwan Johar at the hour mark replacing Siaj Zain who started with a hamstring injury.

Mohamed Fazal had the best opportunity in the second half to give the lead to Colombo FC. The head down by Bodric Dimitri was hit wide of the Navy goal.

Chathuranga Sanjeewa tested Mohamed Imran from long distance with a good strike in the 70th minute. Imran’s quick release found Bodric Dimitri with space, who worked a pass to Mohamed Aakib to take a shot but he was well blocked by Subash Madushan.

Dimitri once again found himself in the right spot when a cross came from the right. His touch went straight to goalkeeper Reginold who collected to deny Colombo FC another chance.

Udayanga Reginold once again saved a shot from Dimitri to keep the score at nil all as Aakib was lurking in the far post for any fumble.

Reginald then fumbled a shot from Safran Sattar and Aakib did get the opportunity in front of goal. Sea Hawks defender Perera cleared the danger off the line.

Zarwan Johar and Mohamed Fazal combined to give a great ball to Bodric Dimitri and this time he made no mistake and slotted past a hapless Reginold.

W.N. Perera was then sent off for an elbow on Bodric Dimitri. Zarwan Johar stepped up to take the resulting free kick and brilliantly curled it around the wall to give Colombo FC their second goal and seal the win.

Johar turned provider when he sent a low cross from the right wing and Mohamed Fazal back flicked to the far post. To wrap up the win for Colombo FC Zarwan Johar converted a penalty after Maduranga Perera was penalized for a hand ball.