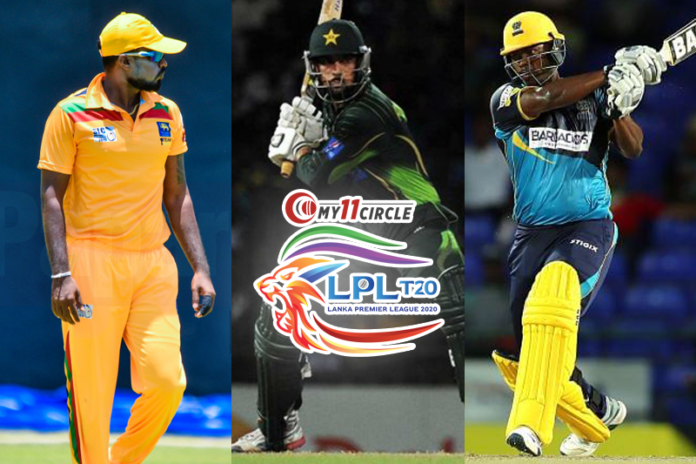 With less than one week to go for the start of the inaugural Lanka Premier League (LPL), the five franchises have been frantically running around to finalize their squads.

Despite the severe travel restrictions and strict health guidelines, almost all the overseas players, support staff and franchise representatives have reached Hambantota barring only a few.

However, due to last-minute withdrawals, injuries, and unprofessional demands of full payments, the franchises have had to make plenty of changes to the squads which are yet to be finalized and formally announced.

The biggest shortcomings to the Lanka Premier League have been the sudden exits of ‘Universe Boss’ Chris Gayle and Sri Lanka T20 Captain Lasith Malinga from Kandy Tuskers and Galle Gladiators squads respectively. Both the teams are yet to name replacements for the two T20 superstars.

Since Malinga was expected to lead the Galle Gladiators, they will now have to find a new skipper as well. Former Pakistan captain Shahid Afridi is expected to lead Galle Gladiators in Malinga’s absence and become the only overseas captain in the Lanka Premier League. However, Afridi may miss the first game since he will only arrive in Sri Lanka with four days out from the curtain-raiser.

Pakistani left-arm seamer Waqas Maqsood, who took 2 crucial wickets in the recent final of the Pakistan Super League (PSL) representing Karachi Kings, has been given a fresh contract by Galle Gladiators for the Lanka Premier League. The other overseas players for Galle Gladiators will be Azam Khan, Mohammad Amir, Hazratullah Zazai, Chadwick Walton, and Ahsan Ali have already reached the Lankan shores.

Jaffna Stallions, by far the most organized franchise so far, were dealt with an eleventh-hour blow when Englishmen Ravi Bopara demanded his full payment before getting onto the plane to which the franchise did not agree. As per the tri-party contract given to the players, they need to be paid only 40% before the start of the tournament, ThePapare.com learns. Bopara is expected to be replaced by West Indies top-order batsman Johnson Charles, who is expected to arrive shortly but will not be available for selection for the first few games.

Sri Lankan left-arm spinning all-rounder Chathuranga De Silva is said to be still not 100% recovered from a fever which has forced the Jaffna Stallions team management to rope in left-arm spinner Prabath Jayasuriya as a cover. The rest of the Jaffna Stallions overseas battalion – Duanne Olivier, Usman Khan Shinwari, Tom Moores, and Kyle Abbott have already reached the team hotel and are quarantining as per the health guidelines. Experienced Pakistani middle-order batsman Shoaib Malik is expected to reach the island on the 22nd of November.

Owned by an Indian actor Sunil Joshi, Dambulla Viiking has reportedly made several changes to their squad by including Pakistani trio – Kamran Akmal, Sohaib Maqsood, and Anwar Ali along with Afghani all-rounder Aftab Alam. Indian fast-bowler Sudeep Tyagi, who retired from international cricket two days ago is also set to be a part of the Dambulla Viiking setup.

The earlier contracted players such as Carlos Brathwaite, Brendon Taylor and Lendl Simmons will not make the trip to Sri Lanka. Brathwaite re-signed with Sydney Sixers for the BBL competition a few days ago. Paul Stirling and Samit Patel are the other two foreign players for the Dambulla Viiking lineup which will be captained by Dasun Shanaka and coached by Englishmen Owais Shah.

Sri Lankan left-arm spinner Malinda Pushpakumara, who was set to play in the Mauritius Cric T10 League later this month, has returned to the island and will be a part of the Dambulla Viiking franchise.

Colombo Kings, with a new coaching setup, saw their Canadian batsman Ravindrapal Singh been tested positive for Covid-19. He is currently in isolation, a special facility set up by Sri Lanka Cricket to treat those testing positive from the bio-bubble.

Andre Russell, the global T20 icon, may have been exposed to Singh since both took the same flight to Sri Lanka. However, Russell should be available for the tournament opener on the 26th of November if he continues to test negative for Covid-19.

Singh is confirmed to be asymptomatic and will be available for selection only after getting through the necessary health procedures. Therefore, to bolster their squad, Colombo Kings have included Afghani off-spinning batsman Karim Sadiq and Sri Lankan fast bowler Dhammika Prasad.

Earlier, they roped in uncapped England batting duo, Daniel Bell-Drummond, and Laurie Evans to their squad as replacements for Manvinder Bisla and Mohammad Hafeez. Afghanistan leg-spinner Qais Ahmed, and former Indian seamer Manpreet Singh Gony are the other overseas signings for Colombo Kings which will be led by former Sri Lanka captain Angelo Mathews.

With the 18 players from the Sri Lankan Test squad training camp in Pallekelle set to arrive in Hambantota on the 22nd of November, all the squads of the Lanka Premier League will be officially announced on the 24th of November after all the franchises including the rest of the local players complete their initial quarantine period in the bio-bubble.