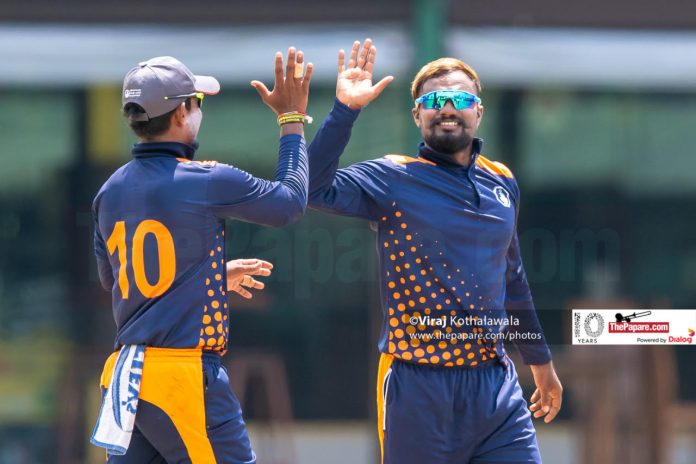 The final spot for the semi-finals in the MCA Premier League Knockout Tournament was booked by Sampath Bank, as they crushed DIMO by 5 wickets today (11).

After being sent into bat at the Marians Cricket Grounds in Katunayake, DIMO ran into early trouble as Vishwa Fernando delivered an impressive spell off swing bowling to capture 3/32. He was well supported by Dasun Shanaka who also bowled a steady spell before ending figures of 2/31.

But it was the discarded (from the national set up) left arm orthodox spinner Malinda Pushpakumara who did bulk of the damage, as he ran through the middle order to return outstanding figures of 4/38.

Former Nalandian Nipun Karunanayake was the only shining light in an otherwise poor batting display for DIMO, as he top scored with a brave 71 against a quality Sampath Bank attack before his team folded first for just 165 runs.

Sampath Bank hardly had any trouble in their run chase as they cruised home inside 31 overs. The left handed Nisal Fransisco made a stylish 59 for the winners while Shanaka made a quick-fire 20 to guide them home.

Right arm seamer Thikshila de Silva was the pick of the bowlers for DIMO as he captured two wickets, but the rest of the bowling looked average as Sampath Bank completed a resounding victory.

The 1st semi-final of this tournament will be worked off on the 19th of November at the MCA ground with John Keells taking on LB Finance, while the 2nd semi-final will be played between MAS Unichela and Sampath Bank at the NCC ground in Colombo. You can catch the live action of both these games on www.ThePapare.com