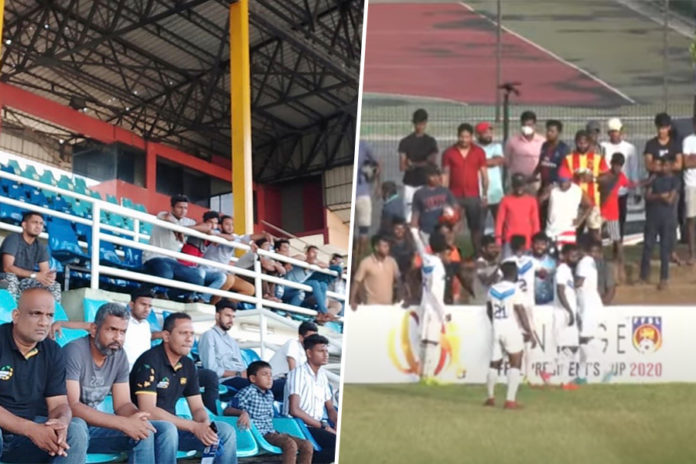 The FFSL President’s Cup finds itself in what could result in a dangerous situation after breaking numerous COVID-19 rules & guidelines implemented by the Government and the Ministry of Sports.

The tournament, which runs from 9th – 31st August, finished the group stage on the 19th. During the course of that time, the organizers, clubs, players and fans paid little to no attention to the COVID-19 rules and guidelines.

The tournament began with the Football Federation of Sri Lanka (FFSL) announcing that the spectators will not be allowed inside the stadiums where the matches were held, which were the Racecourse International & Sugathadasa Stadiums. However, large numbers of spectators were seen attending matches at both venues – primarily for the matches where Saunders played at Racecourse and Serendib played at Sugathadasa. What remains surprising is how the fans entered the Sugathadasa Stadium with it being a closed stadium.

Proper temperature checks and hand sanitization methods were not implemented, while the attending fans were neither wearing face masks nor following social distancing guidelines. Some of the players were seen celebrating with the fans. 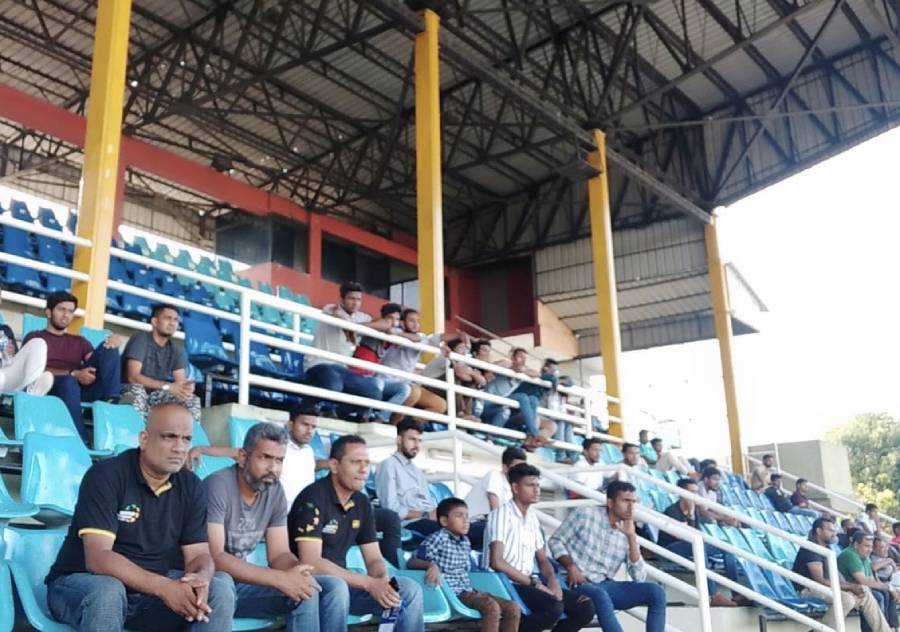 Speaking at the quarter final draw, the President of the FFSL, Anura De Silva, had this to say:

“We said spectators were not allowed but some did come and clubs requested this. We got complaints that we are not maintaining social distancing or wearing face masks. The final responsibility ours.

In the quarter final stage, we will be giving 25 extra passes, and those who have them will be allowed inside the grandstand. People without face masks won’t be allowed. If there are more than 25 spectators, we will send them to the open tiers. If the fans are not wearing masks and a health inspector arrives to check, we will have to bear the responsibility. They could even cancel the matches.”

When contacted by ThePapare.com, Dr. (Mrs) Daminda Attanayake – Sports & Exercise Physician at the Institute of Sports Medicine and Medical & Anti Doping representative to ICC (International Cricket Council), who is also attached to the Ministry of Sports, stated:

“Only 20% of the stadium capacity is allowed. Just like when you enter a private or public company or shop, proper rules and guidelines given by the Health and Sports Ministries should be strictly followed. Hand sanitizing and temperature checks should occur, and face masks should be worn.

Seating should be according to social distancing guidelines. The organizers should also have a record of the fans and where each one was seated. This is to help in contact tracing. Details of fan seating recorded should be in which row, which seat number, from which gate they entered and such.”

Given what transpired around the world in the last 6-7 months, we Sri Lankans should consider ourselves fortunate to be getting back to our daily routines and gradually getting involved in sports, while some countries are still struggling. It is also our responsibility to not misuse the opportunities given, and behave in a manner that will prevent such future incidents.