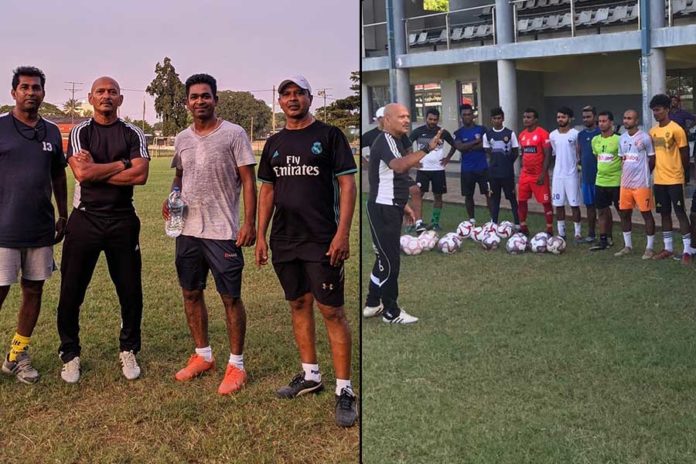 Matara City has taken a decision to appoint the experienced campaigner and the former head coach of the Sri Lanka national football team, Nizam Packeer Ali, as their new head coach.

Indika Thenuwara, who coached the Club hitherto together with the likes of A. G. Weerappuli and K. D. Lalith, speaking exclusively to ThePapare.com stated that the appointment will be valid for the upcoming FFSL President Cup, while they hope to extend it afterwards to the next Dialog Champions League season and other upcoming tournaments.

“Nizam is one of the best and most experienced coaches in our country at the moment. We were also looking for a change at the Club in order to prepare for the new season and I believe that our players will have lots of new things to learn from Nizam and his experience.

For now, his appointment is aimed at the upcoming FSSL President Cup tournament. We do not expect him to win the championship immediately since we still have a lot of aspects that need improvement. But we do hope that he would improve our players and bring us positive results.

We would very much like to have him as our head coach for the upcoming Dialog Champions League and other tournaments as well. We are hoping to discuss it with him once we are done with the tournament.”

Nizam Packeer Ali’s preceding 2-year term at the helm of Sri Lanka football saw them being dropped from 198 to 205 in the FIFA rankings, with just 1 win from their 24 matches while drawing 5. Furthermore, a total of 65 goals were conceded by the islanders during that period, while scoring just 7.

However, Nizam who has previously guided teams like Police SC, Java Lane and Negombo Youth FC into promotion from the Division 1 to the Dialog Champions League, believes that he would be able to unearth a few talented players to the national team from the down South, while simultaneously igniting their interest in football.

“This appointment is specifically aimed at the upcoming FFSL President Cup and I hope to assist them in improving their players. I’ve coached them for two days now and they’re a really young side full of talent.

During my tenure as the national head coach, I was able to discover quite a few good players from the North to the national team. Now, I hope to do the same in the Southern Province as well. We’ve also seen a slight drop of interest in Football in the area over the past few years and I expect to reignite that as well.”

However, upon being asked about his future with the club, Nizam added that it would remain uncertain until the assigned tournament comes to a close.

“I have a few offers from some foreign Clubs as well. However, things have been stalled over the past few months due to the COVID-19 pandemic. I will look at what’s best for me once the tournament is complete and then take a decision about the future.”

The FFSL President Cup kicks off on the 26th of July, with the participation of 20 clubs and it would be the first football tournament in Sri Lanka to come to life since football was temporarily suspended due to the COVID-19 situation in the country.