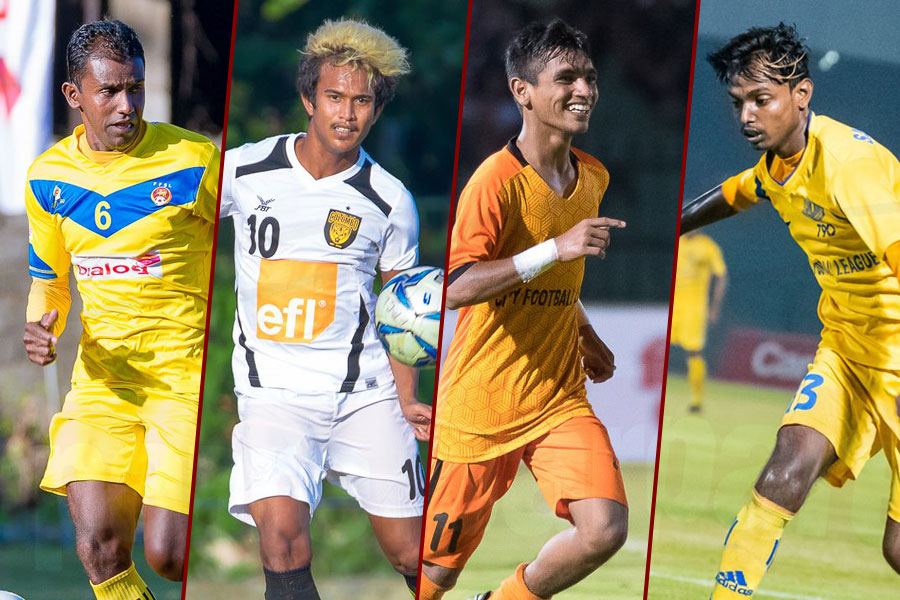 With just 4 teams left in the FA Cup, the semi-finals will see two mouthwatering clashes dished up for football lovers at the Sugathadasa Stadium.

Old enemies Colombo FC and Army SC, meeting for the second successive time at this stage of the FA Cup, along with Saunders and Java Lane who both enjoy the support of a group of very passionate and vociferous fans.

ThePapare.com takes a look at what’s in store this weekend.

Colombo FC v Army SC (13th May at 5.00pm at the Sugathadasa Stadium)

Two very familiar opponents go head to head in what promises to be an enthralling contest.

Army have had a simply devastating run in the FA  Cup and look firm favourites to retain the trophy they won last year with a 12-1 win over Super Sun in the quarter finals further boosting their tag as favourites.

Going into the semi-finals Army have possibly the best balanced side with all their forwards in brilliant form. Punsara Thiruna and Madhushan De Silva have been lively and the duo up front Sajith Kumara and Mohamed Issadeen have combined well together in all their games so far.

Thivanka Chandrasekara has proved that he can add another dimension to the Army front line with his strength and physicality and has been simply superb in the competition thus far being amongst the goals and linking up with the starting XI seamlessly when brought on from the bench.

Colombo FC have not been spectacular by any means going into the build up to this crunch clash against Army SC.

They came away with a slender win over Air Force in a game where Rawme Mohideen was lucky to not have been sent off for a goal denying handball and Kavindu Ishan missed a penalty and some great chances throughout the game.

Colombo FC huffed and puffed in the rain but held on to their first half goal to beat Air Force..

However just as goalkeeper Mohamed Imran put in a splendid performance in that game, different players have delivered in different games throughout the campaign in order to see Colombo FC reach the last four.

Zarwan has been the standout player for the DCL champions and has proved to be a real force playing behind the forwards, pulling the strings in midfield. He will undoubtedly play a key role for them if they are to progress.

Coach Mohamed Roomy has the tactical nous to make slight adjustments with the players available and the way they set up will play a big part in determining whether they reach the final or not. They will need to prevent the Army wingers from getting into dangerous areas as well as find a way to cause problems for a well-established back line.

Two of Colombo’s oldest and most followed clubs clash in what promises to be a heated encounter.

Both teams are well matched in terms of experience and youth, attack and defence and it should make for an enthralling clash.

Saunders have been marching through in military fashion, effective but not really setting the stage alight, a description fully fitting of their come from behind 2-1 win over Blue Star in the quarter final.

Saunders SC produced yet another comeback to seal a thrilling 2-1 win over Blue Star..

Saunders created limited chances and their forwards struggled against disciplined defending from the likes of Fahir Ali and Balagamage Shivanka. Saunders will need to find a way to create more clear-cut chances against Java Lane.

The experienced Chryshantha Abeysekera was the game changer in that game and he will be a crucial cog in the Saunders line up alongside Sanoj Sameera if they are to add to their record tally of FA Cup titles.

They will need to improve the speed of their build up play if they are to get past Java Lane, something that Renown could not do. Guarding against the counter will also be a major aspect of their strategy as that is where Java Lane is at their strongest.

Java Lane on the other hand is a team that has completely changed their style and fortunes since being relegated from the top division at the end of the Dialog Champions League. There is a real ebb and flow to their play and Mohamed Rizkhan’s return to midfield after injury layovers have meant that Java Lane are once again playing at their very best level.

Java Lane SC progressed to the semi-finals of the FA Cup courtesy of a 3-1 win..

Their counter attacking style of play caused Renown no end of problems in the quarter final and the pace of Naveen Jude and Mohamed Abdullah will once again be their main line of attack against Saunders.