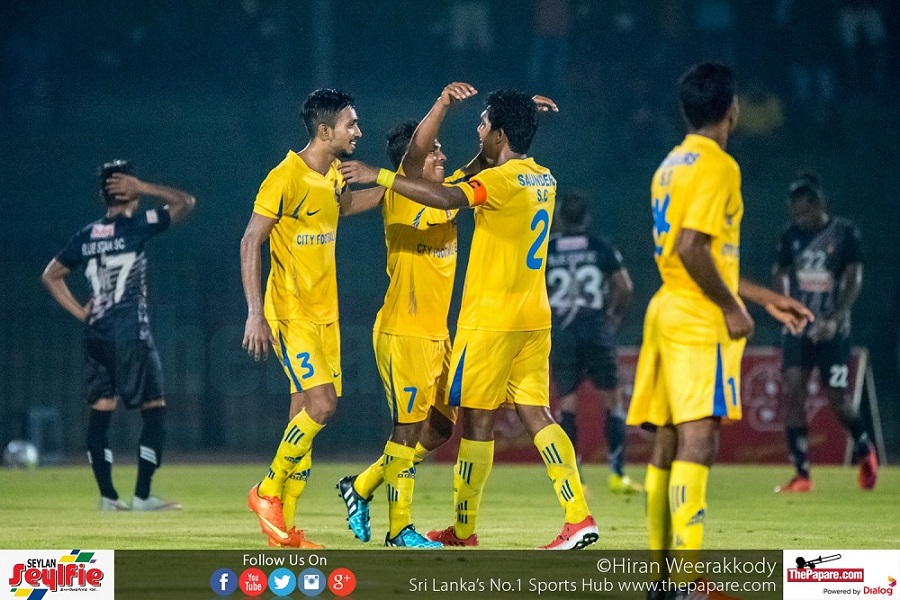 Saunders SC produced yet another comeback to seal a thrilling 2-1 win over Blue Star SC to stop their progression to the FA Cup semi-finals after the high profile clash between two equally matched teams came to a conclusion at the Sugathadasa Stadium.


In the pre quarter finals Blue Star survived a late charge from Singing Fish SC to win 2-1 in Jaffna while Saunders came from two goals down inside the first ten minutes to equalize and win 3-1 on penalties against Negombo Youth SC.

Blue Star got off to the better start despite not enjoying much of the early possession as their ploy to play the lofted through ball to E.B.Channa created a few problems for the Saunders’ defence, with the veteran going close to opening the scoring on a couple of occasions.

Saunders eventually did grow into the game especially after Indreewa Udara and Mohamed Shaheel switched wings with Udara moving to the left. Udara was particularly lively, getting in a few crosses and cutting in towards goal on a couple of occasions as well.

However just as Saunders looked like they had settled down and would create some opportunities for their forwards, Blue Star took the lead courtesy of a mistake from Asanka Viraj. The goalkeeper could only parry a well hit volley from Sanjeewa Seemon into the path of the lurking Channa who made no mistake from point blank range.

Channa went close again a few minutes later, this time getting on the end of a delightful cross from Rangana Silva, but unfortunately he could not direct the effort goal-wards under pressure from Asanka Viraj.

Saunders had a free kick in a good position late on in the half, but could not trouble Manjula Fernando in the Blue Star goal, as they ended the half without any clear cut chances to score.

Blue Star started the second half happy to sit back and protect the lead they had as Saunders struggled to break them down for most of the early exchanges in the second half. Fahir Ali and Balagamage Shivanka in particular were rocks at the back for Blue Star, denying the Saunders attackers any real opportunities on goal.

As in the first half, clear cut opportunities were hard to come by and a long range drive from Chryshantha Abeysekera was the first real save Manjula Fernando had to make. It was Abeysekera who then forced the equalizer for Saunders, as his corner kick somehow managed to find its way into the back of the net courtesy of a deflection from a crowded 6 yard box.

The game really sparked back into life following the equalizer as both teams shifted gears to try to force a winner before the final whistle. Blue Star went close as a cross from Channa just evaded a host of Blue Star players trying to get on the end of it.

Saunders then sealed the game with just over 5 minutes to spare as a deflected cross from Shaheel found its way to substitute Lakmal Fernando who headed home from inside the six yard box. They had several opportunities to extend their lead in the remaining minutes as well, but failed to capitalize on them, eventually seeing out the remaining time to progress to the semi-finals; but only just.

Speaking to ThePapare.com Sumith Walpola Head Coach of Saunders SC had this to say;

“They had some tall and physical defenders which made it difficult for our forwards to get into the game for most of the first half. However we never gave up though, as in the Negombo Youth match, Saunders are a big club and we’re used to the pressure of these big clashes which is a big advantage and we found a way to win . The players and supporters really contributed to this win through their commitment to this club and I thank them. “

On facing Renown or Java Lane – “They are both coached by former national players and have very good squads so it can go either way. It will be a good game of football for sure.”