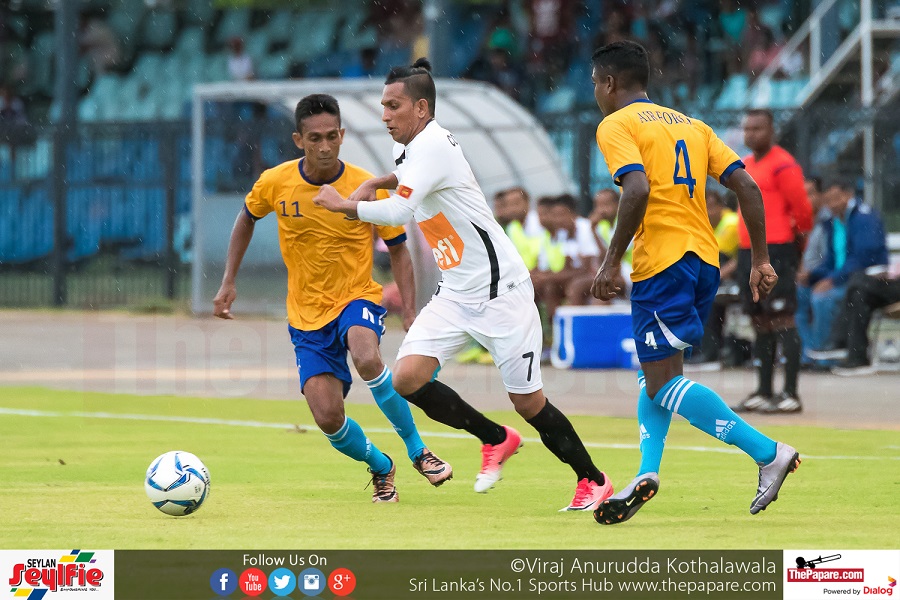 Colombo FC huffed and puffed in the rain but held on to their first half goal to beat Air Force SC 1-0 in the quarter final fixture of the Cargills Food City FA Cup played at the Sugathadasa Stadium.


Both teams didn’t break a sweat in the pre quarterfinal stage as Air Force SC thumped Matara City SC 3-0 while Colombo FC massacred Pelicans SC 5-0. The star players from each team were on song with Kavindu Ishan scoring a hat trick while Zarwan Johar grabbed a brace.

Air Force started the brighter of the two teams with some quick passes. An early chance through counter attack was created but Kavindu Ishan’s low effort from a tight angle missed the goal by a whisker.

The match was scrambled for the first twenty minutes as both teams took their own time to settle down. The Airmen didn’t allow the Colombo FC lads to display their natural passing game.

Colombo FC finally had a shot on target but Dilan Kaushalya could only trouble the post from 15 yards away as Nagur Meera’s blistering run and cross went unrewarded.

The moment for Colombo arrived in the 31st minute through a well-executed counter. Danushka Madushanka covered some quick yards before crossing the ball to Dilan Kaushalya who neatly back flicked the ball to the on rushing Ahamed Shazny who then made no mistake in slotting the ball past the goalkeeper Ruwan Arunasiri to give Colombo FC the lead.

Despite the deficit, Air Force continued to be positive with Nuwan Welgamage almost finding the equalizer soon after the first goal but the desperate Colombo FC defense kept his effort out.

Kavindu Ishan had a great one on one opportunity to get his team back into contention but the Colombo FC goalkeeper made a dashing save to deny the opportunity. The save resulted in Colombo FC hanging on to the lead going into the half time.

Both teams looked a bit edgy when the second half commenced, struggling to put some passes together. Mohamed Imran failed to collect a routine corner chance but the defenders held firm to clear away the danger.

Banking on counter attack, Colombo almost doubled the lead when Zarwan Johar broke Nagur Meera free with a gem of a chip cross but Meera lost his balance while shooting and the shot sailed wide off the near post.

Kavindu Ishan took things to his own hands with a mazy run and crossed the ball inside; the shot taken by D.K.Duminda was stopped by Rawme Mohideen’s right hand resulting in a penalty. Surprisingly Rawme was given only a yellow. But Kavindu Ishan’s effort was feeble and Imran tapped the ball away to safety to save the penalty.

Air Force kept on piling the pressure on Colombo FC in pouring rain but could not find the breakthrough.

Air Force SC’s D.K.Duminda volleyed the ball into the net which they thought was the equalizer but their happiness was short lived as the assistant referee signaled off side.

All the efforts to save the game went in vain as time ran out for the Airmen. Colombo FC held on to their first half goal to enter the semis with the narrow victory.

“It is more of a statement that we proved that we didn’t need foreign players to perform on the big stages. The players did well adapting to the game. Our defense was strong but the midfield needs to be better. We know Army is a very good attacking team but we have our strategies to contain them. We will come out better in the semis.”

“This is what happens when we don’t take our chances. We edged them when it comes to performance. We were creating lots of opportunities but we did not finish our chances including the penalty. The goal was unexpected from Colombo FC but we had time to reply but we let it go through our hands.”