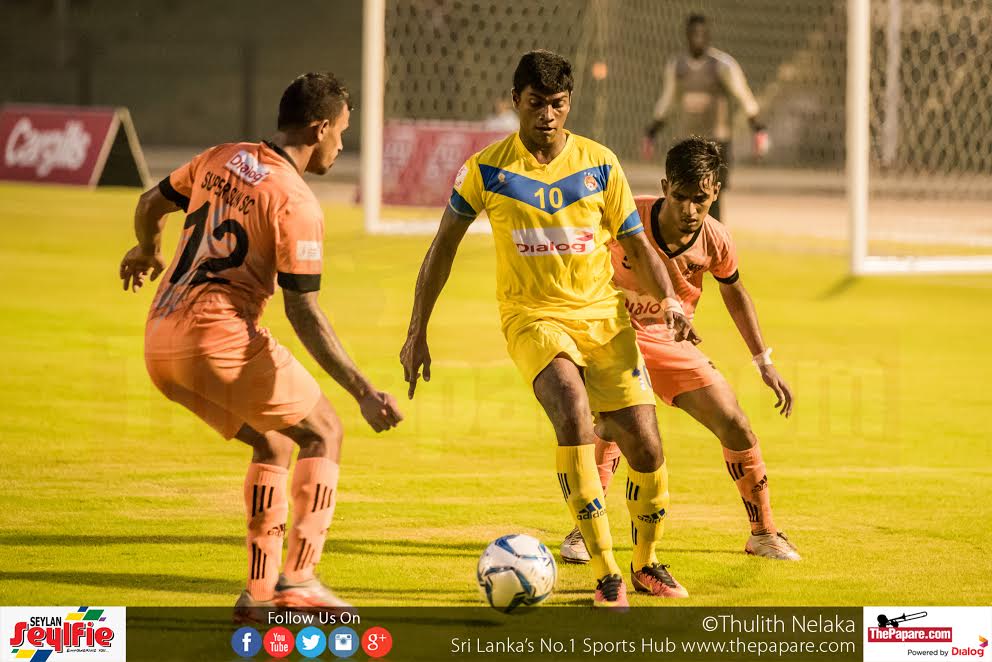 
Army defeated Navy SC 4-1 in a heavyweight battle and on the other hand, Super Sun SC defeated St.Mary’s SC 1-0 to book their places in the quarters.

Army SC did not waste time to dominate possession as Super sun had to defend from the word go. Super Sun received two yellow cards early in the match as the referee had to keep a check of unnecessary challenges.

First real chance of the game came to Sajith Kumara who unleashed a shot from the edge of the box. The effort lacked precision as it skidded wide off the goal post.

Super Sun had their moments as the gameplay of the team centered on Shafraz Kaiz. Army’s defence had a good eye on him not giving much space.

Army scored the first goal in the 18th minute through Mohamed Issadeen who pounced on the handling error of the goalkeeper Mohamed Nishad to bury the ball into the back of the net.

Sajith Kumara doubled the lead in the 29th minute when he scurried to poke Punsara Thiruna’s cross before the clearance.

It didn’t take much time for Army SC to score the third one as Mohamed Rimzan whose initial shot was blocked by the goalkeeper deposited the rebound into the net.

Mohamed Issadeen finished off a beautiful through ball from Sajith Kumara whose delicate touch was expertly finished by the veteran in the 37th minute.

The first half finished with a booking for Sajith Kumara who received a yellow for a dangerous tackle on the goalkeeper who charged down to the ball.

Issadeen completed his hat trick straight from the restart chipping the ball past the diving goal keeper making it 5-0.

Utilizing the wings to the fullest, it didn’t take much time for Army SC to go 6-0 up as Mohamed Rimsan scored his second of the match dispatching a thunderous strike into the goal.

It was goals galore at Sugathadasa Stadium as Army scored the eighth goal in the 61st minute as Issadeen setup substitute Thiwanka Chandrasekara up for an easy tap in.

Any effort put up by Super Sun SC was restricted by the Army defence which looked on course for a clean sheet.

Eighth goal was soon followed by another, this time off a set piece as Chandrasekara headed the ball into the net off Madushan De Silva’s free kick in the 73rd minute.

Chandrasekara, who came in during the second half did not just complete his hat trick but scored his fourth goal as well as he scored twice within two minutes. The Super Sun defence was nowhere to be seen.

In a mouthwatering FA Cup ‘Round of 16’ match at the Vernon Fernando Stadium..

But the carnage didn’t stop as Chandrasekara fed Madushan De Silva with a pin point cross who finished the effort clinically.

It didn’t stop there either as Chandrasekara scored his fifth of the match from point blank range.

Super Sun SC salvaged a consolation goal in the 90th minute as Safraz Kaiz scored a goal for the deflated Super Sun SC.

“The performance was complete. We played to our strength and won the match. We will continue to do the same in the upcoming matches. Early goals in the first half helped us to rotate the squad giving chance to players. It helped us a lot. We hope we get to play and practice in quality like this so that I can train my players better”

“Teams win and lose but losing by 12 goals is inexcusable. We were so bad and players have to be responsible for that. There was lack of practice. Players tool the game easy and paid the price. There is nothing much to say. All we can do is learn from our mistakes and improve in the future”

Army SC – Sajith Kumara (off) Thiwanka Chandrasekara (on) 48’, Bandara Warakagoda (off) Keerthi Kumara (on) 59’, Lakshitha Jayathunga (off) Chamod Madushan (on) 81’