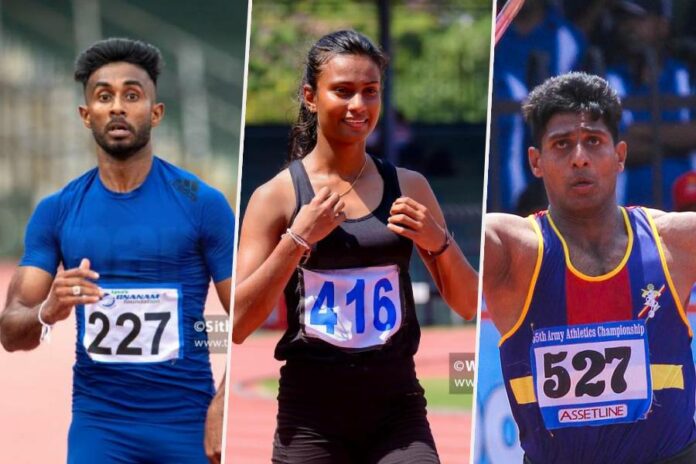 Sri Lanka’s best athletes will be rubbing shoulders with international stars in the coming weeks hoping to improve their World Rankings to qualify for the World Athletics Championships 2022.

The SAG 2019 gold medalist have already competed in the Austrian Open Meet on June 2nd but couldn’t register a valid jump to get on the board. On June 5th, Silva will be participating in the highest-ranked Meet of her career so far, 68° ORLEN Janusz Kusociński Memorial (World Athletics Continental Tour – Gold) in Chorzów, Poland which is a category A competition.

Later, Silva will be joined by Kalinga Kumarage, Sumedha Ranasinghe and Gayanthika Abeyratne who are the Sri Lanka National Champions in 400m, Javelin and 800m/1500m respectively in Switzerland. The Lankan squad will be competing in ATLETICAGENEVE Meet in Genève on June 11th and in CITIUS Meeting in Bern on June 14th. Both Meets are part of the World Athletics Continental Tour – Bronze and are ranked under category C.

Read More : Five Athletes in the running to qualify for World Athletics Championships

Jumpers Ushan Thiwanka (High Jump) and Dhanushka Sandaruwan (Long Jump) are also set to compete on June 11th in USA. The details of this competition will be updated later.

Last month, the fastest man in South Asia Yupun Abeykoon has made headlines this week as he broke South Asian records for 100m (10.06s) and 200m (20.37s) while clocking an impressive 10.08s (-1.2m/s) to finish 5th in the Men’s 100m at the Ostrava Golden Spike – Continental Tour Gold in the Czech Republic. These massive performances have propelled him to the 35th position in the “Road to Oregon” rankings which will determine the qualification for World Athletics Championships 2022 which will be held in the USA from 15th -24th July. Sri Lanka Athletics will be hoping that these upcoming competitions will help the other athletes to enter and stabilize their positions in their respective “Road to Oregon” rankings.