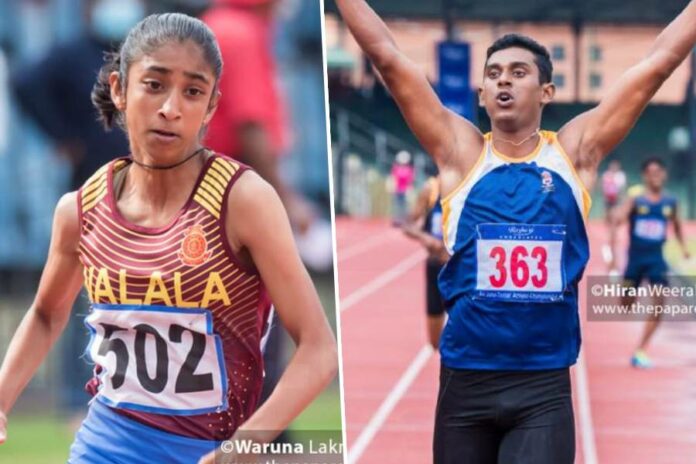 The juniors will be looking to deliver their best at the World stage in the 2022 World Junior (U20) Athletics Championships in Cali, Colombia which will be held from the 2nd – 7th August. So far, as many as 9 Athletes (3 female & 6 male) have met the entry standards for their respective events which were set by the World Athletics organization.

Out of the lot, Tharushi Karunaratne of Ratnayake Central Walala carries the headlines as she was crowned as the champion of the 400m women event in the Centenary National Championship. In the process, Karunaratne broke her training partner – Dilshi Kumarasinghe’s Junior National Record (54.03s) for the event, with a timing of 53.85s.

The 18-year-old also renewed the Junior National Record for the 800m by claiming 3rd place in the women’s 800m event at a pace of 2.04.40min in the Centenary National Championship. The previous record was also held by Dilshi Kumarasinghe (2.04.53min). Karunaratne who has also participated in the last World Junior Athletics Championship in Nairobi, will be Sri Lanka’s prime medal hope. Currently, she has the 5th best timing for the 800m among female junior athletes in the world.

Joining Karunaratne in the 400m event is the Holy Cross College, Gampaha athlete Jayeshi Uththara who has met the entry standard of 55.20s mark easily with personal best of 54.14s.

The only other female athlete to have met the entry standard is Kandyan Hurdler Amesha Hettiarachchi who renewed her own Junior National Record (60.57s) twice for the 400m Hurdles event with a timing of 60.23 seconds. The Viharamahadevi Balika athlete finished 2nd in her pet event in the National Championship behind Kaushalya Madushani who sadly passed away last week.

Long Jumper Hirusha Hashen from St.Peter’s College lept an impressive 7.67 meters in the February Trials as he managed to break the Junior National record for the Long Jump and surpass the entry standard for the World Juniors. Another Jumper from St. Joseph’s College, Pasindu Malshan also managed to meet the entry standard for Triple Jump with a 15.68m leap at the February Trials.

Apart from Hirusha, the only other National Junior record from the boy’s category was made by St. Peter’s College thrower Rumesh Tharanga who hurled the Javelin 69.93m. Hurdler Dhanuka Darshana also came very close to the 400m Hurdles men’s Junior National record but missed it by just 0.03s as he recorded a time of 51.99s. These performances will be sufficient for them to fulfill the entry requirement for the World Junior Championship.

The other two athletes who have met the entry standard for World Junior Championship are Sithum Jayasundara and Kaveesha Bandara who are competing in 400m and 110m Hurdles respectively.

The Sri Lanka Junior National Athletics meet will be held from the 9th – 12th of May at the Sugathadasa Stadium. This meet comes back to the calendar after a lapse of two long years, due to the Covid-19 pandemic. It will also serve as the final trials for the World Junior Championship.

Junior Athletes who have met the Entry Standard so far

It should be noted that even though these athletes have met the entry standards, there might still be a chance of not qualifying for the World Junior Championships, because there is a target number of athletes for each event.