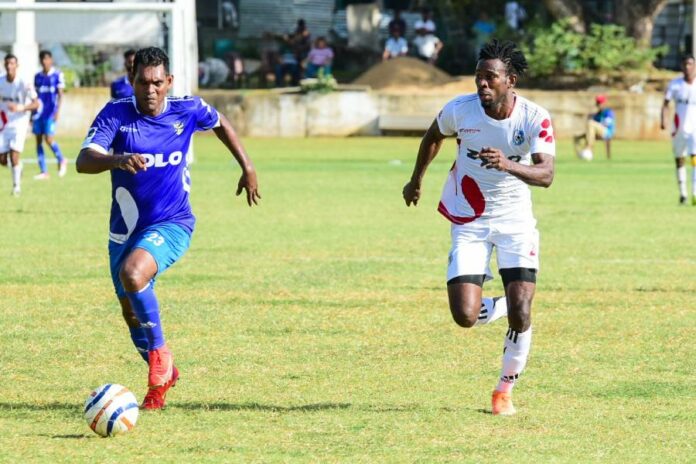 Serendib and New Star recovered from last week’s disappointment to register impressive wins, but Saunders faltered in week 5 of the Champions League 2022.

Serendib hammered Negombo Youth 5-2 at the Maligapitiya Grounds in Kurunegala. Mohamed Fayas scored as early as in the 4th minute to give Serendib the lead.

Serendib got a penalty in the 38th minute where Asante Evans’ strike was saved by Ganesh Krishantha, but Ofori George was at hand to score the rebound. Anthony Ikwegbuo scored for Negombo Youth in the 50th minute to make it 2-1. However, Evans made it 3-1 in the 66th minute to give some breathing space to Serendib.

Skipper Riyas Mohamed scored a brilliant goal from an acute angle in the 78th minute before Evans added the 5th in the 80th minute. Chrysteen Fernando dispatched a penalty for Negombo in 90+1st minute.

New Star’s 2nd half attack saw them secure a 4-1 win against Moragasmulla at the Sugathadasa Stadium. Pubudu Sakulada gave Moragasmulla the lead in the 4th minute, but Mohamed Shakir equalized for New Star in the 7th minute.

Just before half time in the 45th minute, Mohamed Anas made it 2-1 for New Star. Towards the end of the match in the 78th minute, substitute Mohamed Asmin scored the 3rd goal, and Shakir’s goal in the 81st minute made it a comprehensive 4-1 win for New Star.

Saunders failed to add onto their highs from week 4, where they defeated Serendib, and had to be contend with a 0-0 draw against resolute SLTB at the District Sports Complex, Galle. SLTB had to play with just 9 men in the last 20 odd minutes with both Shanmugaraja Sanjeev and Ruwan Chanaka been sent off for a 2nd bookable foul in the 71st and 76th minutes respectively.