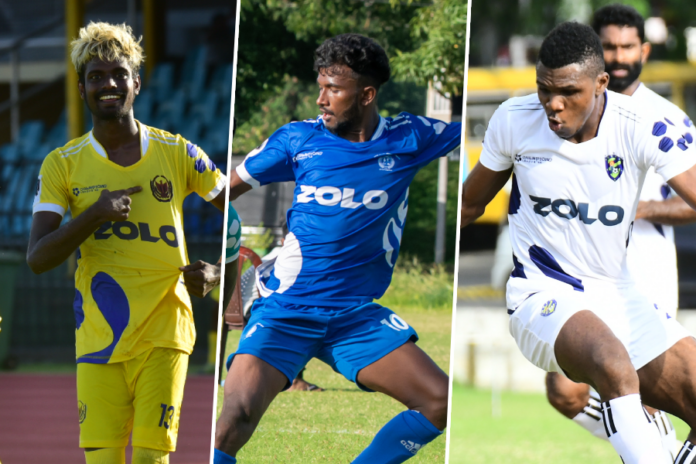 Saunders secured their first win of the campaign against Serendib while Matara City and Negombo Youth defeated Moragasmulla and Crystal Palace respectively in Week 4 of the Champions League 2022.

Saunders demolished the unbeaten, table-topping Serendib 5-1 at the Sugathadasa Stadium. Dilan De Silva set up Sundaraj Niresh to score the opener in the 15th minute.

A neat one-two passing move saw Pathum Gimhana assisting Niresh once again whose effort deflected off a defender and past the onrushing Mohamed Luthfi to make it 2-0 in the 21st minute. Niresh turned provider this time to Pathum Gimhana who scored the 3rd in the 31st minute.

In the 71st minute, Luthfi made a meal of a routine free-kick collection and gave away Niresh’s hat-trick in the 71st minute. The top scorer of the tournament Asante Evans, who was playing with a back injury, pulled a goal back in the 78th minute making it 4-1. Deep into added time in 90+6th minute Nalaka Kannangara scored the 5th and secured the first win for Saunders.

New Star came from a goal back to draw St. Mary’s 1-1 at the Maligapitiya Grounds in Kurunegala. The first half ended goalless with a penalty which was initially awarded to St. Mary’s overturned by referee Lakmal Weerakkody after consultation with the assistant referee.

Mariyathas Nitharshan, who returned from National duty, scored for St. Mary’s in the 54th minute heading in a cross from Gnanaruban Vinoth. Nadeeka Pushpakumara equalized in the 71st minute for New Star.

Matara City kept their winning streak alive defeating Moragasmulla 2-1 at the Kotawila Grounds in Matara. Matara were up 2-0 inside the 11th minute with Boadu Prince scoring in the 8th and Avin Kavishika adding the 2nd three minutes later. In the 18th minute, Eranda Prasad scored for Moragasmulla making it 2-1.

A late Chrysteen Fernando goal saw Negombo Youth defeat Crystal Palace 3-2 at the District Sports Complex in Galle. Anthony Ikwegbuo gave Negombo the lead in the 26th minute before Basith Ahmed equalized in the 35th minute. In the first half added time (45+2nd) Ikwegbuo scored his and team’s 2nd.

Soon after half time in the 48th minute Ibrahim Jimoh once again equalized for Palace but Chrysteen Fernando made certain he scored the winner in the 85th minute.