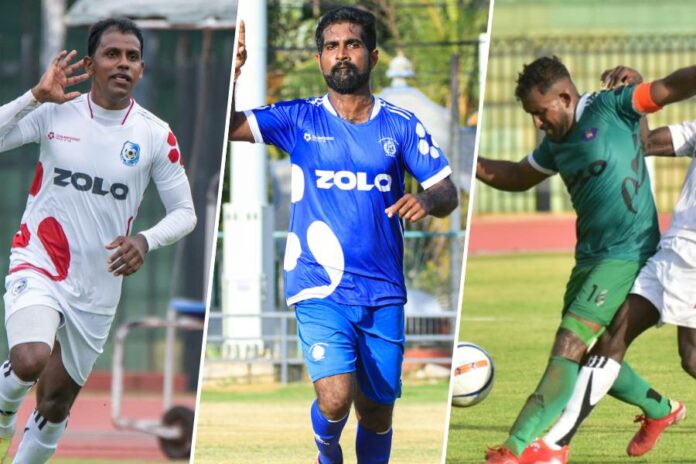 SLTB made it back to back wins with a 1-0 win against Crystal Palace at the Sugathadasa Stadium. SLTB missed a few opportunities in the opening few minutes but Mohamed Nusri scored in the 41st minute to give SLTB the lead.

Sudesh Suranga was brilliant in goal for SLTB making a few saves while Zakeer Ahamed was sent off for Crystal Palace for a second bookable offense.

Matara City’s 2nd half comeback saw them defeat Pelicans 2-1 at the Maligapitiya Grounds in Kurunegala. Arumugan Sujeevan gave Pelicans the lead in the 42nd minute. City’s Larbi Prince equalized in the 60th minute before Keshan Duminda scored the winner in the 68th minute.

Mohamed Issadeen scored twice as Serendib continued their 100% winning record beating Moragasmulla 3-0 at the Bogambara Stadium. All three goals were scored in three frantic minutes of the first half.

St. Mary’s shook off their defeats in the opening two matchweeks to beat the undefeated Super Sun 4-2 at the Durayappah Stadium in Jaffna.

Anthony Jerinsan scored in the 15th minute for St. Mary’s before Anthony Elohor doubled it in the 26th minute. Super Sun’s top scorer Hasitha Priyankara pulled a goal back in the 37th minute as it showed 2-1 at half time.

Gnanaruban Vinoth made it 3-1 in the 71st minute before Priyankara’s strike in the 87th minute, which made it 3-2, set up a thrilling last few minutes. However, St. Mary’s stopped the Super Sun comeback with the 4th goal in 90+2nd minute.