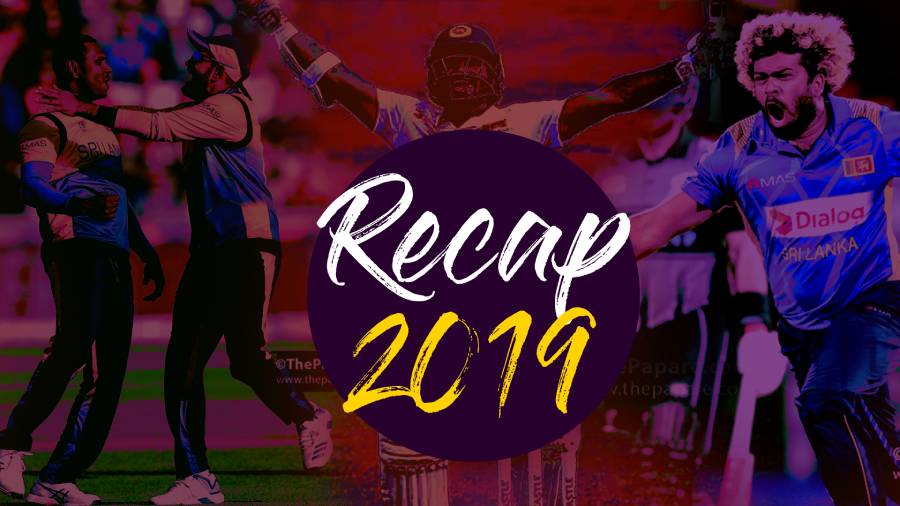 The year 2019 was a bit of a whirlwind year for Sri Lanka Cricket overall, with many defeats away from home and a spattering of wins at home and abroad. A spark of absolute genius added to the mix, made it a topic to articulate. The Lankans were occupied with a busy overseas schedule throughout the year as they traveled to New Zealand, Australia, South Africa, England and Pakistan with little success.

Sri Lanka lost 27 matches out of the 42 they played in 2019 as the national team again failed to surpass the Win/Loss ratio of 1 which is a feat that islanders have failed to achieve since 2014.

The National team had a few Tests matches to play in 2019 in comparison to the previous years as the Lions competed in 8 Test matches in 4 series.

The tour to Australia turned out to be a disastrous one as the visitors under the captaincy of Dinesh Chandimal as they were hammered in both Test matches in Canberra and Brisbane by huge margins. But the next Test Series in South Africa witnessed the highest point of Sri Lanka Cricket in 2019 as an inexperienced unit with a brand-new skipper in Dimuth Karunaratne, whitewashed the mighty Proteas to certify the first Test series triumph for Sri Lanka in the rainbow nation.

Next, the Kiwis visited Sri Lanka but that didn’t end as the home team planned as the series was tied 1-all and in the island-nation’s benevolent attempt to bring Test Cricket back to Pakistan, the visitors suffer a humiliating defeat in Karachi, losing their last Test series in 2019. 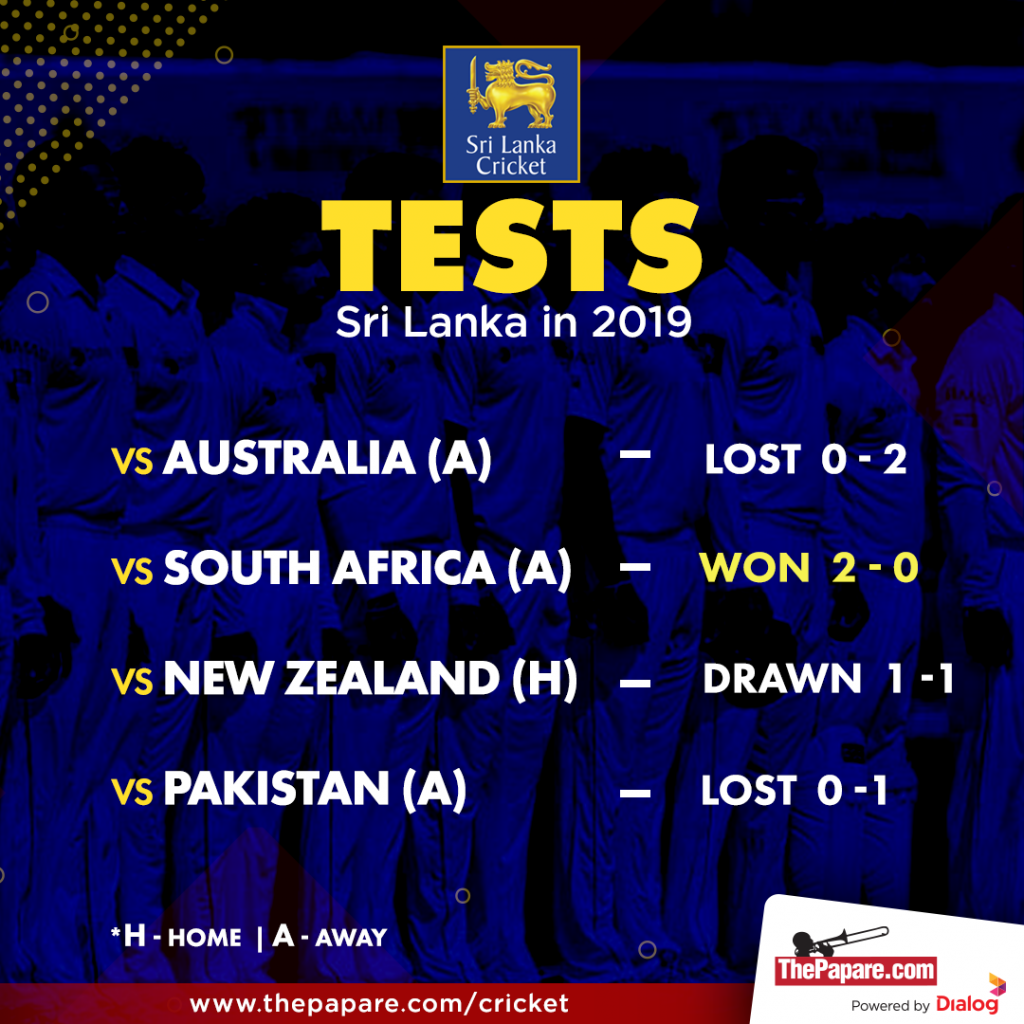 Being a World Cup year, it was an important year for ODI cricket in 2019 but Sri Lanka’s preparations before the pinnacle event saw the islanders getting whitewashed in New Zealand and South Africa comprehensively. The visitors managed to win a singular ODI against Scotland just before the ICC World Cup.

In the ICC World Cup, the Sri Lankans surprised everyone as they toppled the eventual World Champions England and registered victories against Afghanistan and West Indies too. But their poor return in the rest of the tournament resulted in them being unable to qualify to the knock-out stages.

After 2015, Sri Lanka recorded their first home ODI series win when they defeated Tamim Iqbal led Bangladesh unit 3-0. One of Sri Lanka’s most loved sons; Lasith Malinga retired after the 1st ODI of the series, fittingly taking the final wicket of his final ODI. 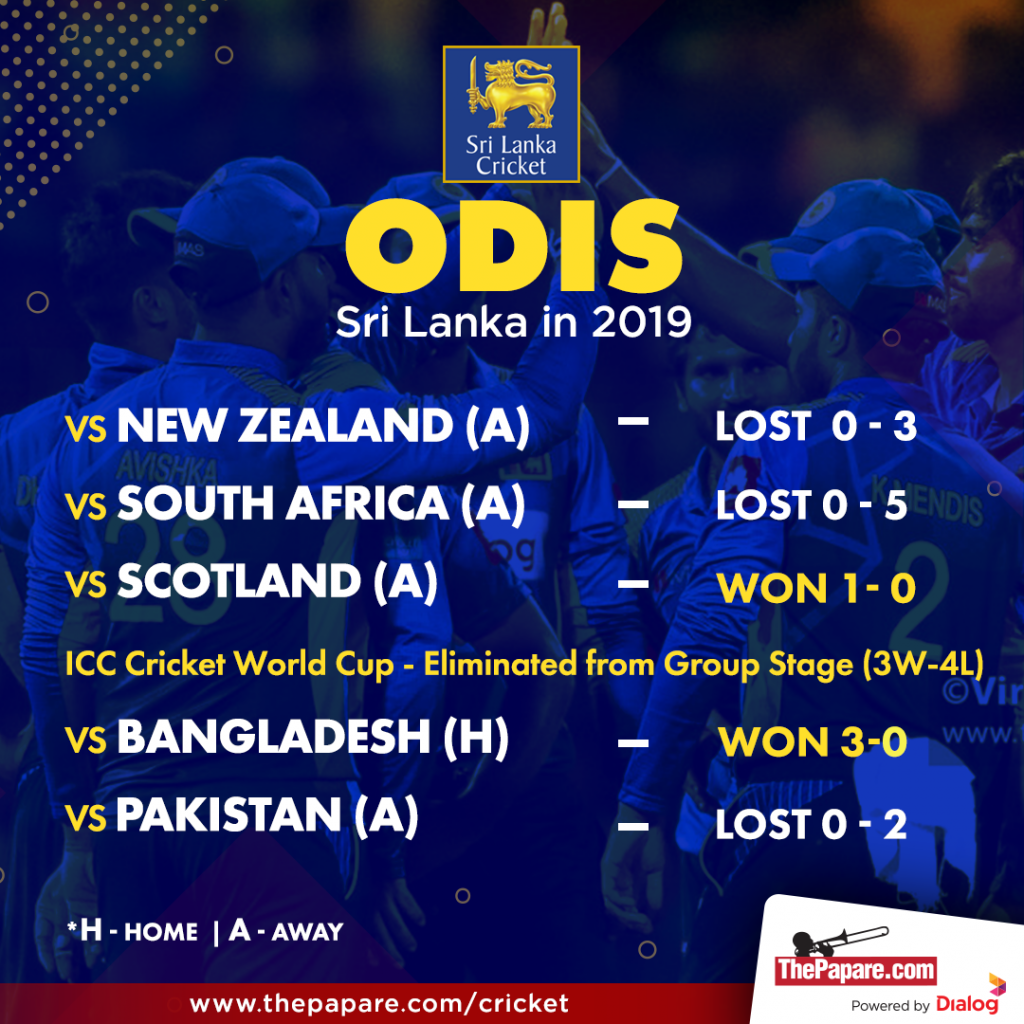 Sri Lanka witnessed a dreadful year in terms of T20Is, losing 4 series out of 5. Their only success was the whitewashing of Pakistan 3-0 by an inexperienced side under the leadership of stand-in skipper Dasun Shanaka. The only other T20I win was registered at Pallekele stadium against New Zealand when Lasith Malinga delivered an epic spell to record his 2nd international “4 in 4” becoming the first bowler to achieve 100 wickets in T20Is.

Sri Lanka’s last T20I series of 2019 in Australia became the lowest point of Sri Lanka in 2019 as the visitors were thrashed by a 3-0 series defeat. 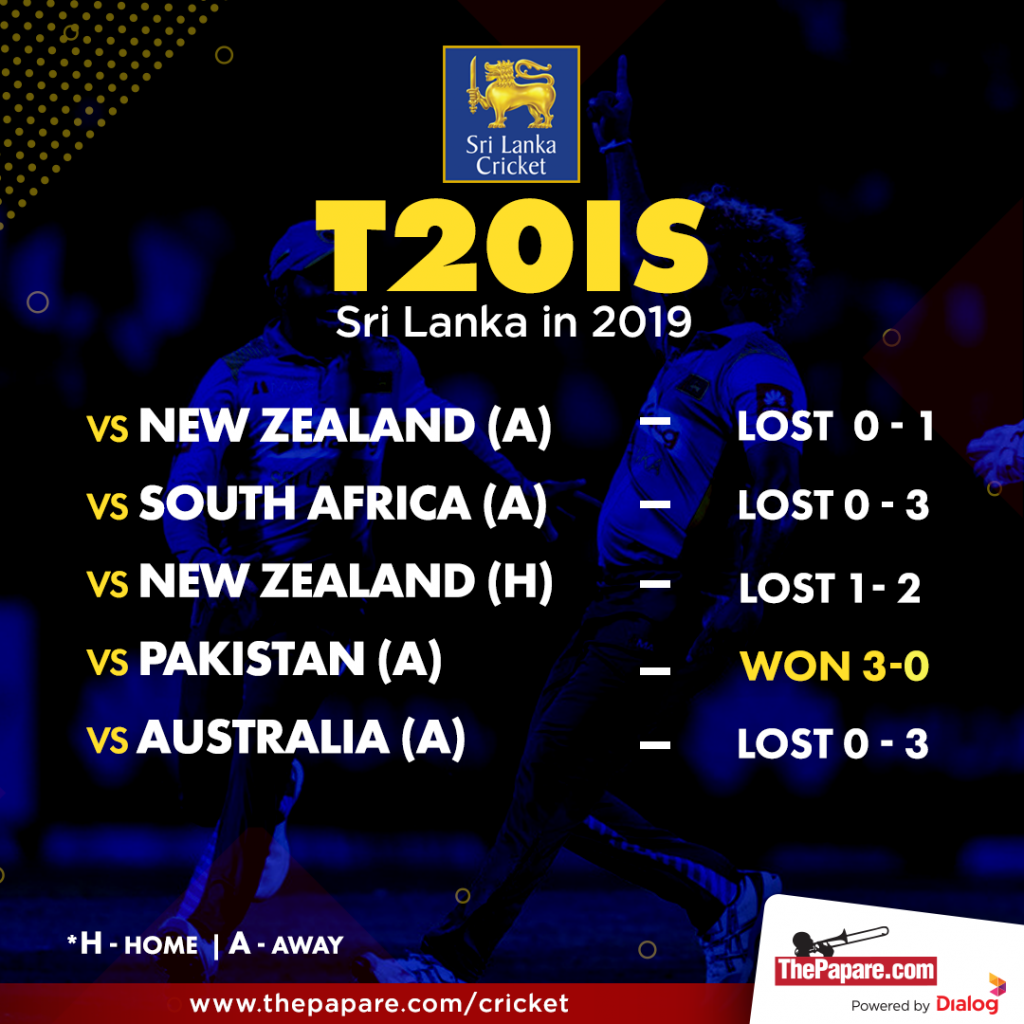 The Highest Wicket taker of the last decade (2010-2019) in ODIs, Lasith Malinga announced his retirement from ODIs in 2019 in the 1st ODI vs Bangladesh leaving as the 3rd highest wicket taker in ODIs for Sri Lanka with 338 wickets.

Another successful fast bowler who has achieved No.01 ODI bowling rankings, Nuwan Kulasekara also hung his boots in 2019 after not playing international cricket since 2017 July.

Ajantha Mendis who had wrecked batting line-ups in his prime and guided Sri Lanka to many sweet memories including Asia Cup 2008 also put a clamp to his cricket career along with Chamara Kapugedara who announced his retirement in December 2019.

Former South Africa, Australia and Pakistan coach Mickey Arthur was appointed as Sri Lanka’s new Head Coach for a two-year period in December after the fallout with Chandika Hathurusingha before the New Zealand tour in August. During the transition period in search of a head coach, Rumesh Rathnayaka spearheaded the national team as interim coach.

Arthur is expected to have the services of Grant Flower (Batting Coach), David Saker (Bowling Coach) and Shane McDermott (Fielding Coach) as a part of a complete overhaul in the national team’s backroom staff.

Sri Lanka will step into the year 2020, with fresh hopes under a new head coach but they will face a huge challenge first thing in 2020 at the hands of the Indians in January. Sri Lanka will be competing in the newly formed ICC CWC Super League in 2020 and will battle for crucial points against England and Bangladesh in the ICC World Test Championship too. With T20I World Cup to be also held in next year, Sri Lanka will definitely hope for a better 2020 than their previous year.