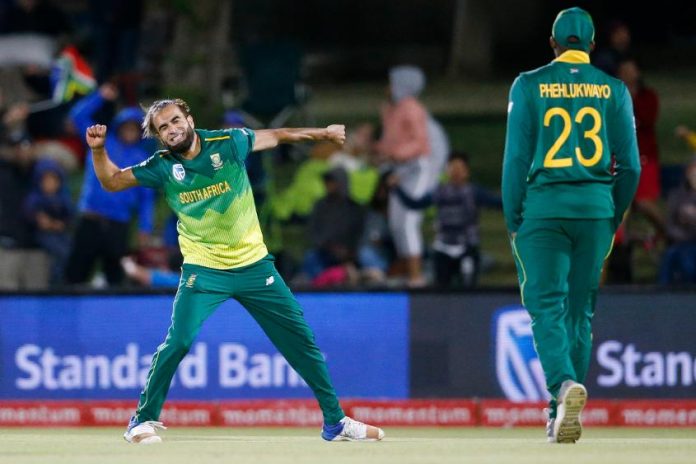 Playing his first ODI for almost two years, legendary Proteas fast bowler Dale Steyn struck a career-best 60 with the bat to rescue his side from 101/7 before claiming the first two wickets to fall and ensure Zimbabwe never got close to South Africa’s 198.

Imran Tahir then took six wickets, including a hat-trick, to turn a stroll to victory into a rout as South Africa claimed an unassailable 2-0 lead in the ODI series.

That South Africa would end with a margin of victory of 120 runs seemed unthinkable when they found themselves 101/7, seemingly headed for a total lower than their eventual margin of victory.

With few exceptions, South Africa’s top order entirely failed to contribute. Dean Elgar nicked off to Tendai Chatara, pushing meekly inside the line rather than leaving committedly, Reeza Hendricks bottom-edged Kyle Jarvis onto his stumps when not fully forward, and Heinrich Klaasen picking out midwicket pulling a ball that was too full for the shot.

Aiden Markram alone offered resistance, his serenity putting into perspective the perils of the rest of the top order. But having made his way to 35 and looking set for much more, he attempted to thrash a long-hop to the fence and only succeeding in edging behind. He, like Hendricks, were perhaps the victims of uneven bounce, which Steyn would go on to extract with gusto.

Markram’s fall left the Proteas 49/4, and though Khaya Zondo and Christiaan Jonker added a useful 36, there was little air of permanence, and little surprise when the latter departed for a frenetic 19-ball 25, bowled slogging wildly.

Zondo was more sedate, but still departed for 21, stumped as he tried to stretch out to the pitch of the ball, and when captain JP Duminy was pinned plumb in front by Jarvis, South Africa were in huge trouble.

Into the fray entered Dale Steyn, joining the unflappable Andile Phehlukwayo, and the two put together the match’s defining stand. There was none of the indecision that wracked the top order, nor the carelessness that muddied the middle. Simply a readjusting of expectations, a decision taken not to do anything silly, and the clear heads to ensure their new plan was seen through.

As Steyn said after coming off “we thought we’ll take it at four an over batting five overs at a time”, and that’s almost exactly what they did in adding 75 in 15 overs risk-free. Even as the supposedly senior batsman fell, strangled down the leg-side, Steyn plowed on.

He came into the game with an ODI high score of 35, but there have been hints in the past, notably in a Test match 76 against Mitchell Johnson, Brett Lee, and Peter Siddle to rescue South Africa from 251/8 back in 2008, that somewhere beneath the surface a batsman lurked, if ever he was needed. He reached his maiden ODI fifty with a glorious straight six to prove the point

By the time he missed a Donald Tiripano full toss and was bowled for 60, near double the game’s next highest score, he had helped South Africa add 97 vital runs for the last three wickets, and just as importantly claimed the momentum heading into the innings break. His side never relinquished it.

Steyn’s contribution was far from over, and he unleashed a thrilling, visceral spell, reminiscent of the great fast bowler injuries have prevented him from being in recent times. There was copious uneven bounce by this point, so much so that some observers wondered if the game might be called off, and no one wielded it like Steyn, hitting the uneasy length time and again, one ball spitting, the next skittling, and the batsmen clueless.

He started the rot, nipping one in to Solomon Mire’s front pad and enticing a pull from Craig Ervine which was intercepted by a special catch from Phehlukwayo, he and Steyn combining once more.

Captain Hamilton Masakadza and Brendan Taylor toughed out four overs of some of the trickiest and scariest fast bowling, before seemingly getting some respite in the form of leg-spinner Tahir, and at 43/2 Zimbabwe might have had their noses ahead.

Instead Tahir ended the game in a flash.

It was he who ended the Masakadza-Taylor stand, fooling the latter with a googly, before Lungi Ngidi made it two in three balls, angling one in to Zimbabwe’s skipper’s pads. Still, even at 58/4 there was slight hope. Twelve balls later, Zimbabwe were 64/9 and the hope was gone. Tahir claimed four of them, including three in three balls either side of the 19th when Phehlukwayo removed Elton Chigumbura.

The last wicket held out for four overs before Tahir, his googly unpickable, fittingly claimed the last, Chatara holing out to Steyn, South Africa’s old-stagers showing one last time that nothing can trump experience.