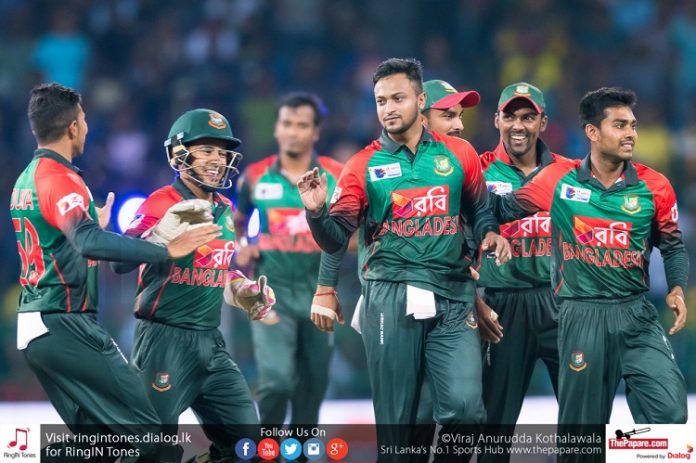 There were sensational scenes at RPS Sunday night as a packed house cheered the Indian team in the finals of the Nidahas Trophy where Rohit Sharma’s side beat Bangladesh in a last ball thriller.

Defending 167, Bangladesh looked to have done enough to win the title after Mustafizur Rahman bowled a maiden in the 18th over of the Indian innings leaving them requiring 34 runs off the last two overs. The ice-cool Dinesh Karthik then smashed 29 runs in eight balls to take the game away from Bangladesh. With India requiring five runs off the last ball, Karthik did a Javed Miandad hitting a flat batted six over extra cover.

It’s not always that an eight-ball performance is awarded…

Not only at RPS, the sentiments among all Sri Lankans was that they wanted India to win. People tend to generally back the underdogs but on this occasion everyone wanted India to win after Bangladesh players’ shameful, uncultured behaviour on Friday. Sadly, they were not handed harsher penalties.

The tournament had progressed smoothly until the do or die battle between Bangladesh and Sri Lanka on Friday. When Shakib Al Hasan landed in Colombo ahead of Friday’s game, one senior scribe alerted us that the behaviour of Bangladeshi team could change dramatically and true to word they hit new lows.

Television cameras caught up the disgraceful behaviour of the Bangladeshi captain, who at one point called back his players after the umpires failed to call a no-ball for a second bouncer in the over by Isuru Udana. Seconds after Mahmudullah Riyad sealed Sri Lanka’s fate with a match winning six off the penultimate delivery of the game, the glass door of the dressing room was broken.

Although CCTV footage were inconclusive as to who caused the damage, The Island learns that Match Referee Chris Broad spoke to the caterers in the dressing room to find out the culprit.

Movenpick Hotel in Colombo, where the Sri Lankan and Bangladeshi teams were staying did the catering during the games and at the investigation, one of the caterers informed Broad that it was Shakib who caused the damage.

The eyewitness informed Broad that the Bangladeshi captain had forcefully pushed the door causing damage.

Broad, who has been Match Referee since 2004, is known for his inconsistencies and despite having sufficient proof, decided to turn a blind eye and let off Shakib with a mere slap on the wrist – 25 percent fine and one demerit point.

You’ve got to admit the fact that Bangladesh have improved as a team leaps and bounds in the last few years. In Shakib, Mushfiqur Rahim, Tamim Iqbal and Mustafizur Rahman, they have some world class players. The young ones like Liton Das, Mehedi Hasan and Mominul Haque are bright prospects. The world in fact should be appreciating Bangladesh’s emergence as a force to be reckoned with after the initial years of struggle. However, the behaviour of the likes of Shakib is not helping their cause.

A few Sri Lankans on Friday didn’t cover them with glory either. Although the likes of Dhananjaya de Silva and Kusal Mendis weren’t charged, there is an urgent need to remind them that they are ambassadors of their country.

They can learn a few things by looking at Dinesh Karthik. He had won the game for India single-handed and then made a graceful exit. In a superb gesture, India’s stand-in captain Rohit Sharma decided to take the team on a victory lap appreciating the support the crowd gave his team.