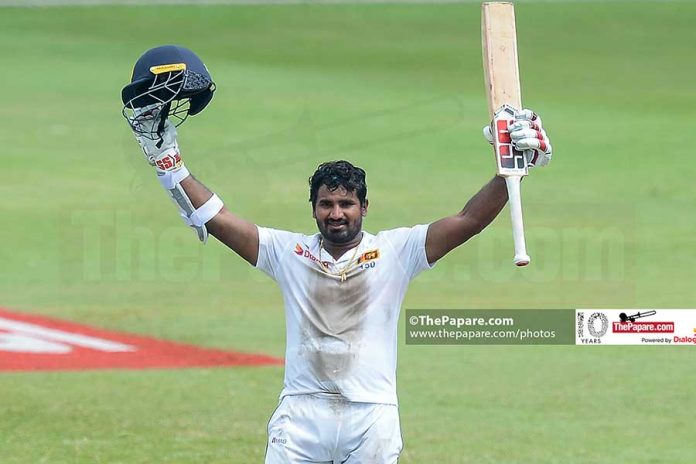 Kusal Perera’s 153* at Kingsmead in the 1st Test match vs South Africa will be remembered for an age by anyone who witnessed that heart stopping, nail biting Sri Lankan win. You couldn’t have scripted it any better. A top order collapse was followed by a mini fight back by the middle order, only to see another pile of wickets fall one after the other when the chasing team got a sniff of the target.

Then everyone loses any hope of a win, but maybe the only one who believed that it could be done, finishes the game with one wicket in hand. It was just fairytale stuff.

Perera walked into the middle with Sri Lanka facing a drought of wins. If you asked someone when the last time Sri Lanka tasted victory was, they would have to think a bit, search the web and look into the archives.

Sri Lanka haven’t won a game in any format since last October, that’s nearly 4 months ago – an eternity in modern day cricket. So, when set a target of 300 plus, no one believed in them. No one gave them a chance, not even their fans. But the men who mattered, they believed.

Perera walked into a lion’s den where the World’s No. 1 ranked bowler Kagiso Rabada, 4th ranked Vernon Philander, former No 1 Dale Steyn and last series’ Man of the Tournament for South Africa, Duanne Olivier were on the hunt, constantly hitting the 140kmph mark as they searched for ways to smash past Sri Lanka’s defenses.

They were steaming in with bouncers and swinging yorkers to find their next victim, but Perera never surrendered.

Perera came from a dressing room where no one is assured of a place, not even the coach. Players had to secure their spots in the team before they could even think of a win. There have been more than 8 captains who have led Sri Lanka in the last two years.

Before the team departed to South Africa, and after another disappointing tour of Australia, Test captain Dinesh Chandimal was suddenly rested and dropped from the squad! An Anti-corruption office has been opened in Sri Lanka by the ICC and the Sports Minister recently declared that Sri Lanka Cricket is the world’s most corrupt body.

Add to that, it has been a hectic few months with the coach and the management. “Shambolic” is an understatement to describe the atmosphere at Sri Lanka Cricket. But Perera wasn’t bothered by any of that in the middle.

The win has come for Sri Lanka despite all of this. Perera came, he slashed, he smashed, he took blows to his hand. He fell on his face but got up to smash again. Perera has guided the long tail of Sri Lanka to their second ever win in South Africa.

When Sri Lanka won their first game there, in the very same grounds, mind you, they had they likes of Kumar Sangakkara, Mahela Jayawardene, T.M. Dilshan, Thilan Samaraweera and Rangana Herath in their ranks. In contrast, the current team has two debutants, two players who have played under 5 tests and another two players under 25 years of age. Fortunately for them, the playing XI also included a lion-hearted guy who didn’t give up.

Perera had many chances to throw this match into the gutter. When Dhananjaya de Silva was given LBW and Sri Lanka fell to 206/6, when Sri Lanka were 9 down with more than 70 to chase, each time those mighty pacies hurled the ball as him as he was getting his struck all over the body, he could have given up. But he kept his nerve, his resolve never wavered.

This innings by the Sri Lankan left-hander is equal to or may be better than what is considered as the greatest match winning test innings of all time, Brian Charles Lara’s 153* vs another brutal Aussie attack at Barbados in 1999.

Lara, batting at number 5, scored an equivalent innings to Perera’s with the West Indies tail, to secure a thrilling one-wicket win. Nearly 20 years later, just like the great Lara, a dashing left-hander from a tiny island replicated the same feat, this time away from home, against what many would call one of the best bowling line-ups in world cricket.

Perera farmed the strike exceptionally well to guard last man Vishwa Fernando but kept his confidence on the no 11 when the partnership started to flourish. Their 78-run stay at the crease is now officially the “highest last-wicket partnership in a successful test run chase ever”.  Fernando scored only six of those 78 runs, 6! That record itself suggests how mighty Perera’s innings was.

His monstrous sixes at the very end of the match will no doubt be replayed over and over in the coming years.

A true team man to the end, after that magical innings all Perera could muster at the post-match presentation was – “I’m a little tired now. I don’t know what to say. I did something. I did my part, but we won as a team”