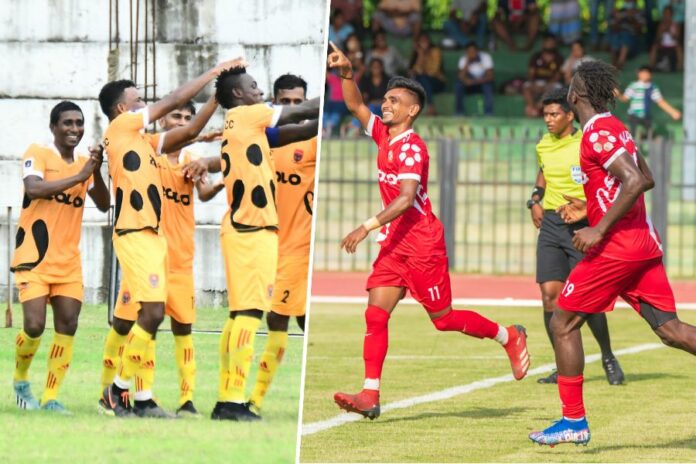 Matara City continued their unbeaten streak while Negombo Youth and Java Lane won scoring 5 goals each in week 6 of the Champions League 2022.

Matara City defeated St. Mary’s 3-1 at the Maligapitiya Grounds in Kurunegala. Larbi Prince was the quickest to react inside the box from a corner to score from close range in the 37th minute.

In the 57th minute, he doubled the lead pouncing on a rebound off the upright from a thumping Adevu Isaac free-kick. Prince Boadu made it 3-0 in the 71st minute capitalising on a defensive mistake.

With rain falling Mariyathas Nitharshan pulled one goal back for St. Mary’s but they were not able to score any more as Matara made it 6 wins out of 6 matches.

Java Lane produced a stunning comeback as they came from 2-0 down in the first half to shock New Star 5-2 at the Sugathadasa Stadium.

Chameera Krishantha scored in the 21st minute and Mohamed Shakir made it 2-0 in the 31st minute as New Star went into the halftime break with confidence. However, Java Lane brought in Rizkhan Faizer at halftime and in the 48th minute, his goal made it 2-1. Three minutes later in the 51st minute, Naveen Jude found the equalizer.

New Star was not able to recover as Mohamed Safran gave Java Lane a 3-2 lead in the 68th minute and a 73rd minute penalty from Oluwaseeun Olawale made it 4-2. Mohamed Abdullah scored the 5th in 90+1st minute capping off a wonderful comeback win.

Anthony Ikwegbuo scored in the 16th and 28th minutes while Niluka Janith added the 3rd in the 31st minute. Nalaka Kannangara scored for Saunders in the 35th minute as Negombo led 3-1 at halftime.

Janith’s 2nd in the 54th minute made it 4-1 before Saunders skipper Indreewa Udara scored in the 67th minute. Ikwegbuo put the icing on the cake with the 5th goal in 90+1st minute.