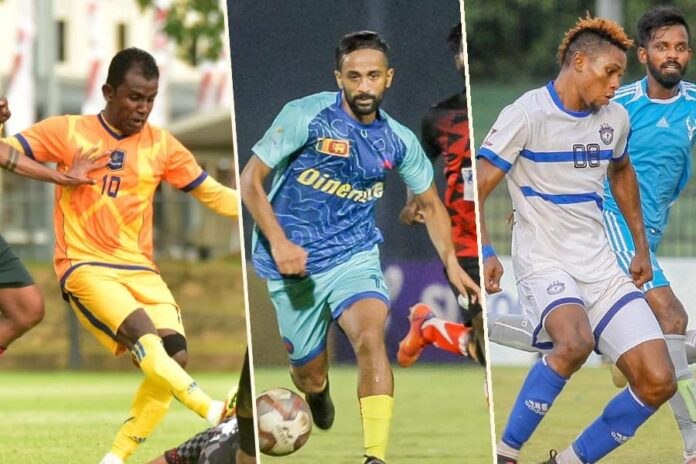 The 9th and final week of the Super League saw Defenders, Up Country Lions and Renown securing wins against New Youngs, Red Stars and Ratnam respectively.

Mohamed Issadeen scored a hat-trick and assisted a goal as Defenders thumped New Youngs 6-1 at the Racecourse Stadium.

New Youngs opened the scoring in the 22nd minute through Mohamed Mushikan but Issadeen, playing his final game for the Defenders, equalized five minutes later. Just before the break Gihan Fernando scored an own goal giving the soldiers a 2-1 lead at half time.

The 2nd half was all Defenders as Issadeen scored his second in the 64th minute and combined with Rifkhan Mohamed to add another two between the 84th-89th minutes. Issadeen set up Rifkhan to finish past an onrushing Danushka Rajapaksha in the 84th minute before Rifkhan provided with the cross for Issadeen who scored his 3rd with a header two minutes later.

In the 89th minute, Rifkhan scored his 2nd of the day with an identical finish to his opening goal. The win saw Defenders finish in 7th place with 2 wins, 3 draws and 4 losses while New Youngs with two wins, 1 draw and 6 losses finished 8th.

Renown defeated cross-town rivals Ratnam 2-1 at the Sugathadasa Stadium to finish the Super League in the top 4.

Renown continuing their impressive form opened the scoring in the 31st minute with Dimuthu Priyadarshana heading in an Aman Faizer cross. After half time, a mistake at the back allowed Danso Enoch to equalize for Ratnam in the 53rd minute.

However, a swift passing move between Francis Agbeti and Job Michael saw Michael scoring the winner in the 74th minute. The loss saw Ratnam finish in the bottom two with three draws and no wins.

Waseem Raseek scored a hat-trick as Up Country Lions defeated Red Stars 3-0 at the Sugathadasa Stadium.

Waseem scored the opener as early as the 2nd minute with his left foot. Soon after the break, in the 52nd and 60th minutes, he added his 2nd and 3rd goals to complete the hat-trick. The win saw Lions finish in the top 5 with 16 points while Red Stars finished their campaign in 6th place with 10 points.