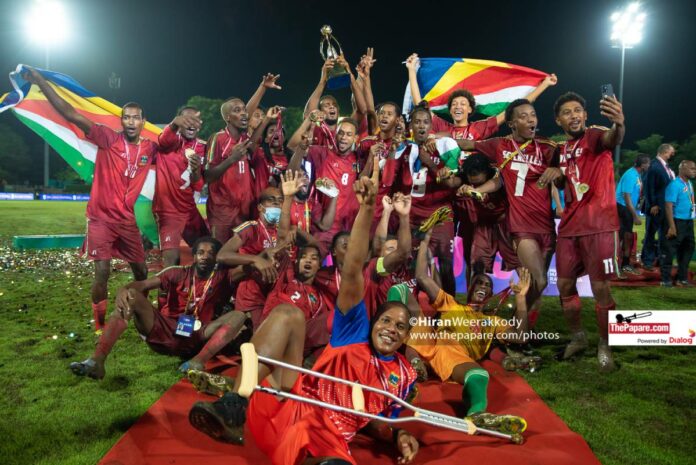 Seychelles came from 3-1 down to equalize in injury time and defeat Sri Lanka 3-1 in the penalty shootout to clinch the Prime Minister Mahinda Rajapaksa Trophy at the Racecourse International Stadium.

Marvin Hamilton’s free kick gave Sri Lanka an early lead before Emmanuel Jean equalized for Seychelles just before half time. Sri Lanka held a comfortable two goal lead through Mohamed Aakib and a Waseem Razeek penalty before the wheels started to fall off in the final 6 minutes.

Benoit Marie made it 3-2 two minutes before full time and Elijah Woodley stunned the home fans with the unlikely equalizer in injury time. With momentum on their side and Alvin Michel in imperious penalty saving form The Pirates went on to win the shootout 3-1.

Sri Lanka came into the game without three of their main players in Kavindu Ishan, Dillon De Silva and Duckson Puslas. Both Kavindu and Dillon suffered what looked like serious knee injuries in their game against Bangladesh two days ago while Duckson was sent off for a handball in the same game.

Seychelles are unbeaten in the tournament with two draws, against Bangladesh (1-1) and Maldives (0-0)

Sri Lanka kicked off in front of a vociferous packed stadium and within minutes the decibel levels went up sevenfold as Marvin Hamilton gave Sri Lanka the lead. Hamilton’s ambitious 35-yard free kick took a vicious deflection as it trickled into the goal with goalkeeper Alvin Michel wrong-footed.

Sri Lanka dominated but, in first half injury time Emmanuel Jean silenced the crowd with a looping header which beat Sujan Perera in goal.

The hosts wrestled back the lead just before the hour mark when Mohamed Aakib acrobatically dispatched a long throw-in, which was not cleared. Sri Lanka went onto control the game with Seychelles showing desperation to get back on level terms.

With 17 minutes to go, nifty work from Waseem Razeek earned Sri Lanka a penalty which he himself duly converted as Sri Lanka started to smell victory in the air. However, the visitors had other ideas as Head Coach Vivian Both rung in the changes to mount a comeback.

With two minutes left Benoit Marie pulled a goal back as Sri Lanka went into panic mode from which Elijah Woodley capitalized to score the equalizer minutes later to silence the 8000 plus capacity crowd and send the final into a penalty shootout.

Sujan Perera saved Maxime Franchette’s penalty but Hamilton was not able to take advantage of it as he sent his penalty wide. Woodley, Jean and Perry Ernesta all scored their penalties for Seychelles thereafter.

Asikur Rahuman’s 2nd penalty was brilliantly saved by Michel before skipper Sujan Perera scored his penalty to show how it is done. Charitha Rathnayake needed to score the 4th to keep Sri Lanka alive but Michel denied the defender as the crowd looked on in disbelief and the Seychelles players rejoiced and broke out into a celebratory dance.