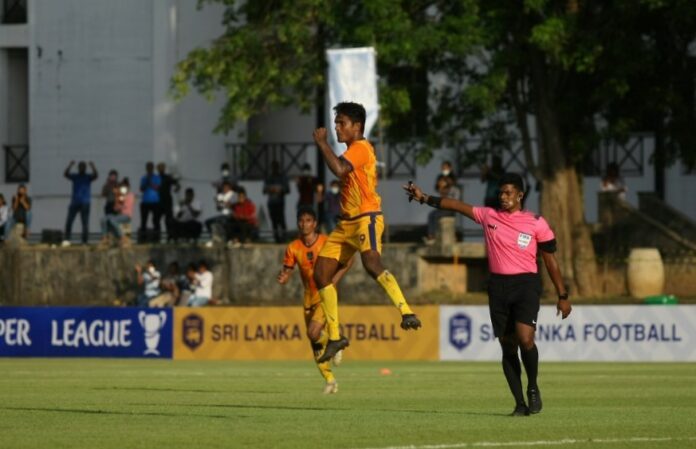 Defenders fought back from 2-0 down to draw 2-2 against Sea Hawks, who found themselves down to 9-men towards the later part of the game in week 5 of the Super League 2021 played at the Racecourse Stadium.

In the early going Defenders had a few chances which they were not able to convert as Sea Hawks to control of proceedings. Danushka Madusanka opened the scoring for the sailors in the 27th minute after some good work done by skipper Subash Madushan. Four minutes later Madushan added a 2nd neatly guiding in a cross from the right.

After the break, Defenders gradually got into the game. Sajith Kumara made it 2-1 for the soldiers scoring a brilliant 25-yard stunner beyond the reach of Udayanga Perera. Minutes later Rifkhan Mohamed equalized delicatly backheeling a Kumara low cross.

Tempers flared towards the end as Sea Hawks, who hadn’t conceeded a goal in the previous four games, found themselves down to 9-men. Nagoor Meera received a direct red card for the stamp on Sajith Kumara while three minutes later Samuel Kingston too was sent off for an elbow to the head of a Defenders’ player.