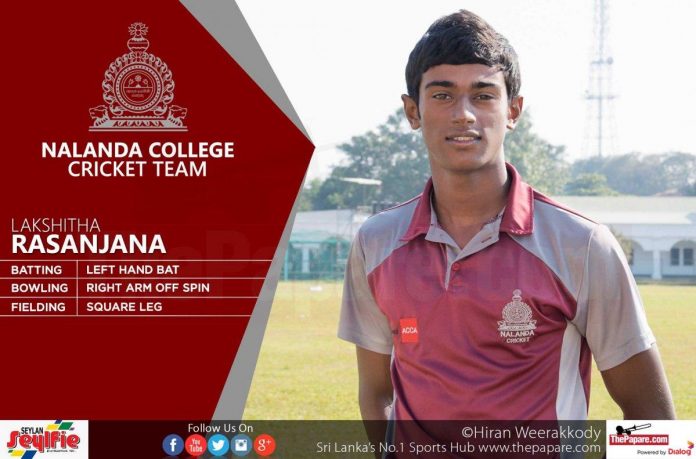 Three matches of the Singer Schools ‘Under 19 Division 1’ Cricket Tournament 2018/19 were conducted today around the island. Lakshitha Rasanjana who stroked a century yesterday, picked up a bag of 7 wickets today against Wesley College and guided Nalanda College to an innings victory. St. Peter’s College and St. Benedict’s College took honors in the other two fixtures worked off today.

Nalanda College recorded a comprehensive innings victory over Wesley College in their traditional fixture which was worked off today at Wesley College Ground. Wesley College resumed day two struggling at 8 runs for 4 wickets and managed to add another 99 runs to the overnight score before being bowled out.

Ashan Fernando stroked 69 runs while Savindu Fernando (45) and Amantha Perera (39) chipped in with their useful contributions for the lads from Negombo. Uvin Senevirathne starred with the ball picking up 4 wickets for 65 runs for the hosts.

St. Peter’s College began their second innings 54 runs ahead but managed to post only 67 runs all-out, setting a target of 122 runs to win for the visitors. Ravindu Fernando was mainly instrumental in causing the batting collapse of the Peterites as he grabbed 6 scalps for 34 runs. The Maris Stella College batsmen were in a spot of bother in the run chase as they posted 83 runs for 5 wickets when umpires called stumps on day two.

Pasan Suwahas played brilliantly but missed a well deserved century as he was dismissed on 97 runs. In addition, Vihanga Ruwanaran made an unbeaten 52 runs for the hosts. St. Anne’s College batsmen began their second innings trailing by 115 runs and posted 28 runs for 1 wicket at stumps on day two.