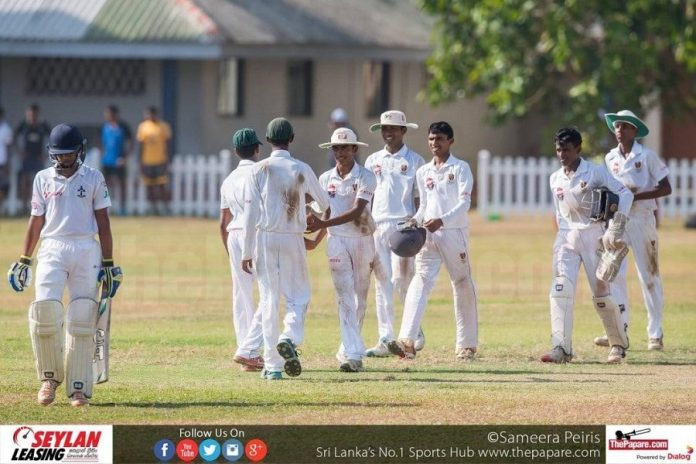 Two matches of the Singer Schools ‘Under 19 Division 1’ Cricket Tournament 2018/19, was concluded today.

St. Aloysius College recorded a comprehensive innings victory over St. Mary’s College in their ‘Group C’ encounter which was worked off today at the Galle International Cricket Stadium. St. Mary’s College resuming day two on 46 runs for the loss of 6 wickets, were bowled out for 101 runs in 42.2 over’s in their first innings.

Vinduka Malshith picked up 4 wickets while Kavindu Dilhara grabbed 3 scalps for the hosts. After been asked to follow on the visitors once again batted badly in the second innings, and were bowled out for just 43 runs. Vinduka Malshith starred again with the ball picking up 5 wickets for just 22 runs.

Ravindu Rathnayake tried hard with the bat scoring a well-made 73 runs for Isipathana College. Manendra Jayathilaka, Pasindu Adithya and Nethushan Kumara picked up 2 wickets each for D.S. Senanayake College. After been asked to follow on, the Isipathana college batsmen showed a slightly better batting display in their second innings, posting 188 runs for 8 wickets when umpires called stumps on day two.