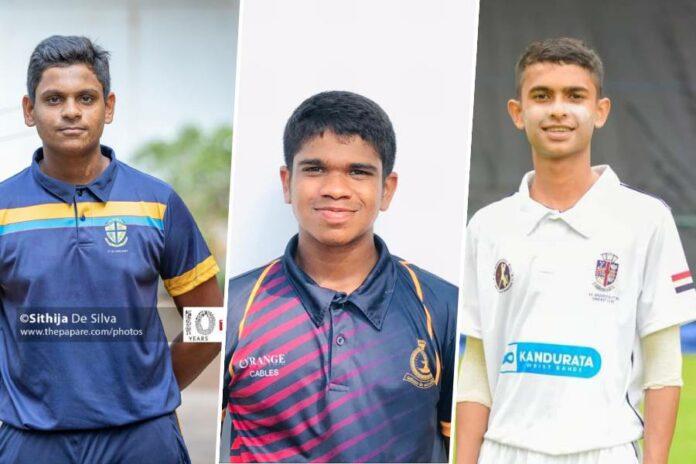 Thurstan College and St. Joseph Vaz College qualified for the Semi-Finals of the U19 Inter Schools Limited Overs Tournament as they defeated Isipathana College and Marist Stella College respectively in the Quarter-Finals played today (10th November) at Colombo and Moratuwa.

Thurstan College registered a convincing 6 wicket against Isipathana College in the first quarter-final of the U19 Inter Schools Limited Overs Tournament played today at St. Joseph’s College Grounds in Colombo.

Vihas Thewmika and Duvindu Nishan wrecked Isipathana’s batting lineup sharing 7 wickets between them. After restricting Isipathana College to just 75 runs, Thurstan batters chased down the target of 76 quite comprehensively with 31 overs to spare.

Vishwa Rajapaksha’s all-round heroics pilot St. Joseph Vaz College to the Semi-Finals of U19 Inter Schools Limited Overs Tournament, as they defeated Maris Stella College by 7 wickets in the second quarter-final of the tournament played today at St. Sebastian’s College Grounds in Moratuwa.

Rajapaksha was the pick of the bowlers for St. Joseph Vaz College as he snared 4 wickets for 18 runs restricting the opposition to just 72 runs. He led the run-chase as well scoring unbeaten 31 runs with the bat for the lads from Wennappuwa.

Imesh starred with the bat scoring a brilliant century while delivering a match-winning spell with the ball taking 5 wickets for 20 runs including a hat-trick.