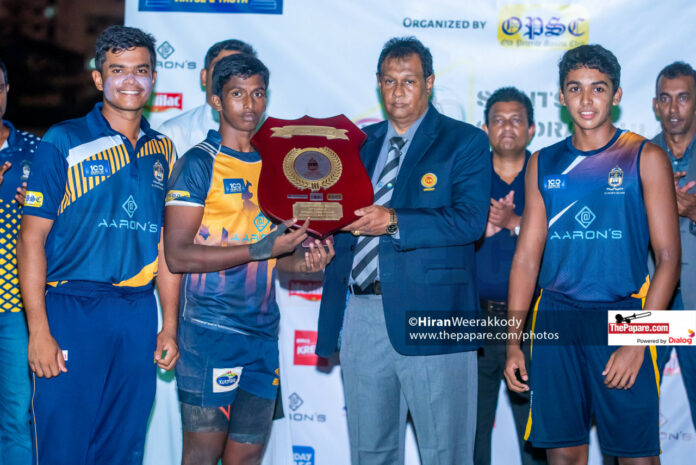 On the 29th the tournament started with basketball and two out of the three round one games took place in the morning and afternoon sessions. The host Peterites walked out with wins in both the games to book their spot in the basketball finals. The other sport which took place on day one was the main attraction event T10 Cricket. The two favourites of the T10 tournament St. Joseph’s College and St. Peter’s College registered victories against St. Anthony’s College and St. Benedict’s College respectively.

But the next result came out of the book as St. Benedict’s College hammered a mammoth 116 against the Joes in their 10 overs and then went onto defend the total registering their first win and the first upset of the tournament. Peterites on the other hand managed to beat St. Anthony’s College to get one step closer to the final. The main event of day 1 was set for the evening session as the two arch rivals, St. Joseph’s College and St. Peter’s College battled in round one of the T10 tournament. But unfortunately it became a no result as bad light halted play on Day 1 after the St. Joseph’s innings. With that no result, St. Peter’s qualified for the finals and the Joes needed Anthonians to beat the Bens to book their final spot.

On Day 2, Anthonians who were down and out in the T10 cricket tournament, came out all guns blazing to beat the Benedictines which sent the Joes to the finals against their well known rivals. St. Anthony’s and St. Benedict’s then met in the 3rd place playoff and the Anthonians just showed their class by dismantling the Benedictines for a second time in a row. Along with this, the final basketball game of round one between Anthonians and the Benedictines also took place where the latter won to qualify for the finals. And during the morning session of day 2, the rugby sevens action also began with the host Peterites making short work of the other two teams, St. Anthony’s and St. Benedict’s to make it three finals out of three (St. Joseph’s College participated only in the T10 cricket tournament). With a win against the Benedictines, Anthonians booked a date for the finals against the Peteries.

In the basketball finals, St. Peter’s College continued their domination. Although it was a close game during the first quarter, Peteries just showed their talent and class in a ruthless manner to make a scoreline which once read 19-14 become 74-24 at the end to win their first championship with two more finals to go.

The Peterites who were the much fancied side in the rugby sevens tournament, faced a shocking one sided loss against the Eagles from Kandy as they lost 31 points to 5. The Anthonians who pulled out a spirited performance managed to reverse the result of round one between the two schools where Peterites won 27 points to 5.

In the cricket finals. It was a battle between the arch rivals St. Joseph’s College and St. Peter’s College. Hosts Peteries who batted first never got going as the tight and disciplined bowling by Joes completely halted their progress and didn’t give them any room to free their arms. The Joes fielding was also a clear highlight as five runouts took place while attempting to run twos. After 10 overs of complete struggle, St. Peter’s could only put up a modest 67 runs which gave  St. Joseph’s an easy 68 run target. The Josephians never looked like they were in any trouble as they chased down the target in just 8.2 overs after losing just 3 wickets. Skipper Sadeesh Jayawardene top scored for them with an unbeaten 25 and the highly talented Shevon Daniel scored a quickfire 22.

As the three titles were shared among the hosts St. Peter’s College, St. Joseph’s College and St. Anthony’s College, Peterites who qualified for the finale in all three events walked out with the overall championship of the Saints Quadrangular Tournament 2022.