A quarter-final of the Singer Schools Under 19 Division 1 Cricket Tournament 2018/19 and a pre-quarterfinal of limited overs leg was held today.

Continuing on their merry way from the first day after being put into bat by Mahinda College, S. Thomas’ didn’t hold back their charge as they earned the bonus point and qualified for the semifinals.

Thomas’ started day 02 proceeding on 274/4 with inform batsman Umayanga Suwaris in the middle on 68. Suwaris couldn’t make a big statement on the day as he fell for 72 runs but that didn’t turn out to be the much-needed break Mahinda players were looking for.

17-year-old Kishan Munasinghe then orchestrated a patient and long innings of 388 minutes, scoring a mammoth 150 runs including 20 boundaries. Munasinghe and Dellon Peiris combined for 400 deliveries in the partnership for the 7th wicket, adding 146 runs to suck out any spirit left from the Mahinda bowlers.

Peiris made a half-century for himself and S. Thomas’ declared their inning at 514 for 8 to record their first 500+ score in an innings in their 140-year-old cricketing history.

Mahinda College could only bat for 3.4 overs before the match was over but former Mahinda captain Hansika Welihinda crossed 1000 runs for the season.

The match was drawn and the Thomians qualified for the semifinals in the Singer Schools Under 19 Division 1 (two-day) Cricket Tournament on bonus points.

They will face Nalanda College; another dangerous side this season, in the semifinals while the other semifinal will be worked out between St. Sebastian’s College vs the winner of Prince of Wales’-St. Joseph’s battle. 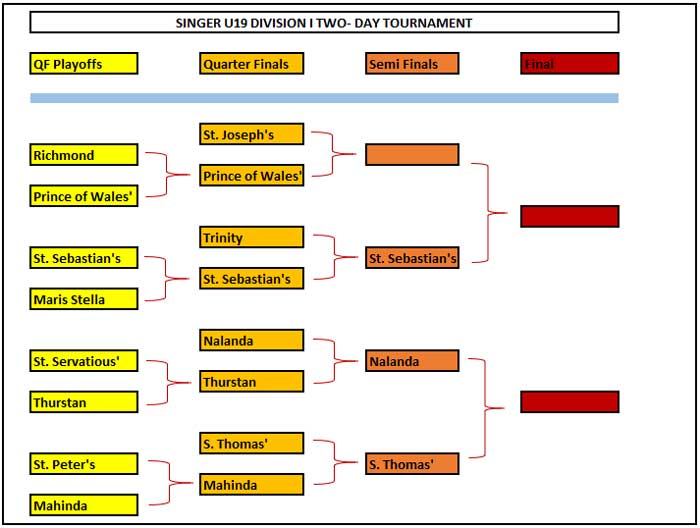 The final pre-quarterfinal of the Singer Schools Under 19 Division 1 (Limited Overs) Cricket Tournament between St. Servatius College, Matara and Thurstan College, Colombo which was held today (2019-03-26) at the Thurstan College grounds was won by the hosts comfortably to qualify to the quarterfinals of the tournament.

Visitors crumbled for a cheap 173 runs in 44 overs and Thurstan College chased the target inside 32 overs to win by 6 wickets.

They will have to battle it out against St. Benedicts in the quarterfinals.