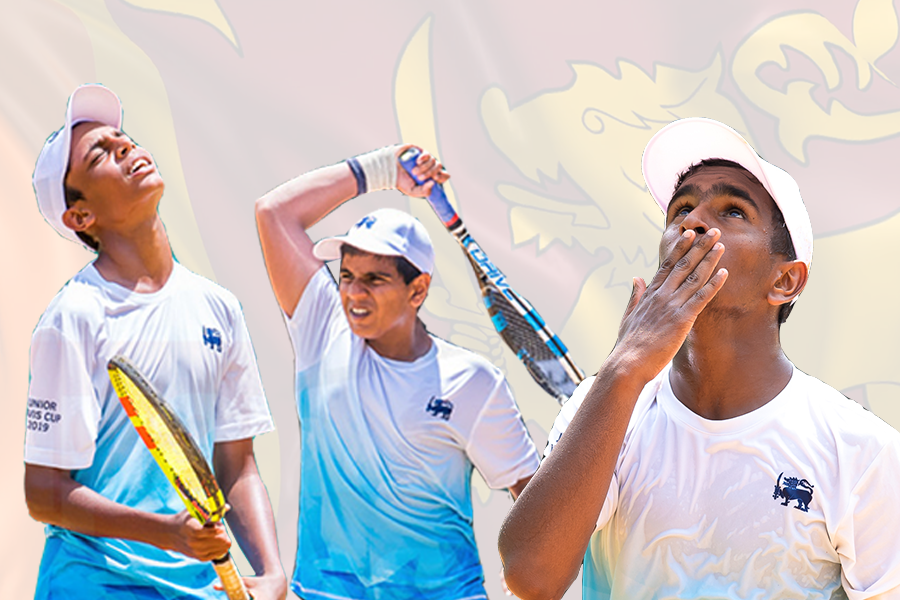 The unbeaten Sri Lankan outfit till the very end, faced a heartbreaking defeat at the hands of Syria in the final of the pre-qualifying round, Junior Davis Cup Asia/Oceania Team Championship 2019.

The final hurdle against tournament 2nd seeds proved a tad too high for the home team to tackle, as they went down fighting in the deciding doubles and settled with Silver. However, their win against Lebanon in the semifinal already booked them a seat in the final qualifying round of the Championship, which is set to commence in April.

As usual, Chathurya Nilaweera kicked off proceedings with the 2nd singles rubber and recorded a straight set victory of 6/2, 6/3, setting up the course for Sri Lanka. However, Taym Al Azmeh of Syria was too strong a force for WIjemanne to gun down as all things tied up, sending the boys into the deciding Doubles. 2nd Singles scores read 6/2, 6/0 in favour of the visitors.

In the Doubles, fresh legs of Dhilvan Herath teamed up with Chathurya Nilaweera against Taym Al Azmeh and Pierre Djaroueh. After a close first set and a begging second, Sri Lanka were left to lick their wounds, losing in straight sets 7/5, 6/3.

Syria were crowned champions in the Pre-qualifying round of the Asia/Oceania Junior Davis Cup 2019 with Sri Lanka finishing in second place.

Earlier in the tournament…

Starting from the 4th, Sri Lanka has had a spotless winning streak, beating non-seeded and highly seeded nations alike. From their first win against Oman in the Group stage matches to their semifinal win against 3rd seeds Lebanon, Sri Lanka earned themselves a double merriment in the tournament.

Not only did they secure their place in the finals of the pre-qualifying rounds, they have also pushed themselves into the final qualifying round of the Junior Davis Cup Asia/Oceania Team Championship; The big fight before the World Group qualification.

Sri Lanka was pooled alongside Oman, Malaysia and Bahrain in their group stage matches. They played off against the Oman team on the 4th of March and recorded a stunning whitewash, winning both the singles and doubles matches.

Sri Lanka secured their 2nd outright win; Much like day 1, Sri Lanka quickly snatched the two singles matches to officially win the tie and later went on to win the doubles to complete the 3-0 whitewash.

Sri Lanka faced off against Malaysia in their final group stage encounter, playing for the top spot in the pool. Once again, the front runners for Sri Lanka stepped up to seal their victory and top the group, at the same time.

Sri Lanka clinched a 4th outright victory over Vietnam in their first tie in the playoffs to secure a spot in the semifinals.

Read More: A save in the Doubles keeps Sri Lanka’s hopes alive

The clay courts of the Sri Lanka Tennis Association were lit on fire by the Lankan cubs at the Junior Davis Cup pre-qualifying rounds, as they marched into the final, with an unbeaten record.

Read More: Jaw-dropping performance by Sri Lanka puts them in the final