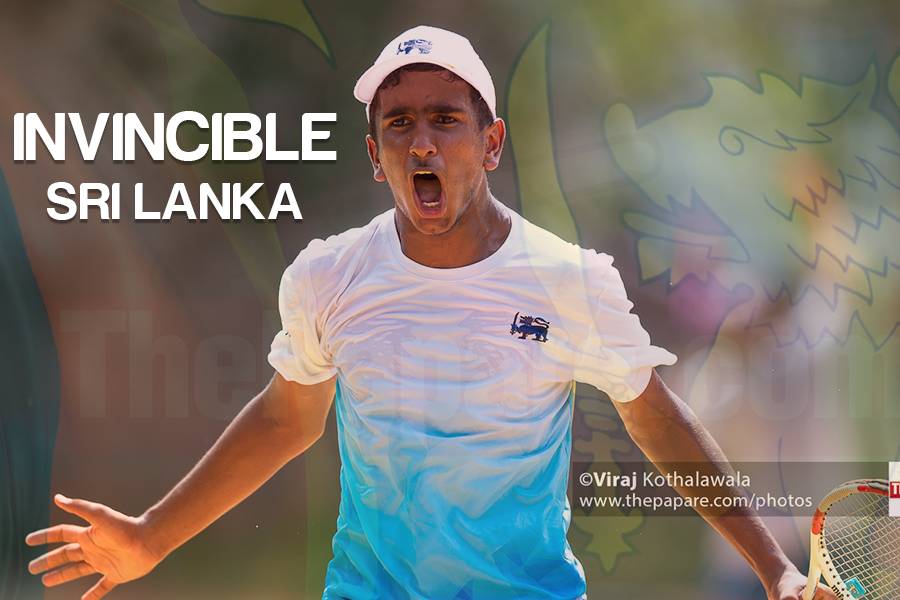 The U16 National Davis Cup Tennis Team finished off an unbeaten week in the group stages of the all-important pre-qualifying round, Asia/Oceania Junior Davis Cup Team Championship 2019.

Pooled in with Oman, Bahrain and the mighty Malaysians, Sri Lanka got off to a stellar start in the tournament, beating both Oman and Bahrain in a breeze. Today, 6th March, Sri Lanka faced off against Malaysia in their final group stage encounter, playing for the top spot in the pool.

The day started with the ultimate confidence booster, a three-setter that eventually went the Sri Lanka’s way. Chathurya Nilaweera manned the 2nd singles for Sri Lanka against Mitsuki Leong Wei Kang of Malaysia.

Nilaweera started on a low with a first set loss of 6 games to 2 but the Lankan bounced back to level things in the second, 6/1. All was left for the 3rd and final set which was a close encounter from the get-go. Just over 2 hours later, 14-year-old Nilaweera drove it home for Sri Lanka edging by 2 games at 5-5. Final score, 6/2, 1/6, 7/5.

Already a match up and one more for the win, Thehan Wijemanne stepped up to the plate for the 1st singles; Malaysia’s Hayden Khoo Menon was the challenge for young Wijemanne. After 1 hour and 17minutes, Thehan Wijemanne claimed the win in a valiant straight set performance. The local had a clean 6/4, 6/4 victory to lock Sri Lanka’s win.

With this, the doubles was conceded by the home team, having officially won the tie against Malaysia. Unbeaten in the tournament so far, Sri Lanka topped the group and will enter the top 8 in the play-offs as a top contender.

7th March will mark the first day of Sri Lanka’s journey to the top 3 who will qualify for the final qualifying round before the World Group. Sri Lanka faces Vietnam in their first elimination round, starting at 09:00am, at the Sri Lanka Tennis Association.

Stay logged on to ThePapare.com to find out the latest results along with photos of the ongoing 2019 Asia/Oceania Pre-qualifying round of the Junior Davis Cup.