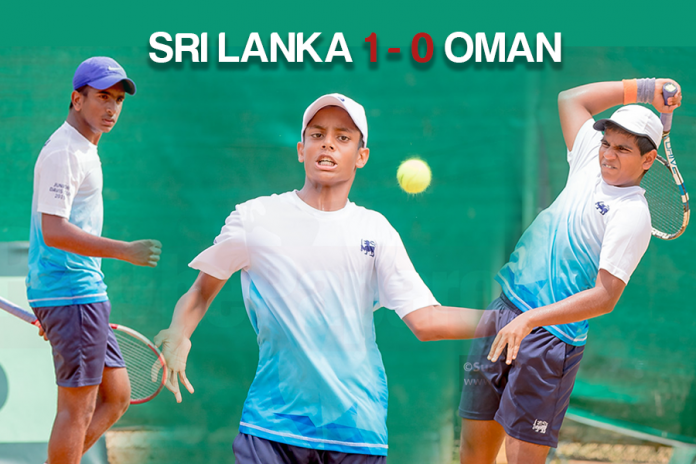 The U16 national team of Sri Lanka got off to a good start at the pre-qualifying round of the 2019 Junior Davis Cup Team Championship, winning their opening tie against Oman, 3 – 0. The tournament is currently underway at the Sri Lanka Tennis Association and will run its course till the 9th of March.

Sri Lanka was pooled alongside Oman, Malaysia and Bahrain in their group stage matches. They played off against the Oman team yesterday (4th March) and recorded a stunning whitewash, winning both the singles and doubles matches.

Starting the day off playing the Men’s 2nd Singles was 14-year old Chathurya Nilaweera, taking on Marwan Faiz Khanjari. Nilaweera needed just 43 minutes to grab his team their first victory of the games, with an easy 6/1, 6/0 match.

Thehan Wijemanne took Sri Lanka home by winning the 1st singles right after, in a breezy 2-setter. Muneel Tufair Al Rawahi was the one to face Wijemanne’s wrath as the latter finished off the match 6/1, 6/3 officially marking Sri Lanka’s win over Oman.

Already up by 2 matches, Dhilvan Herath and Chathurya Nilaweera paired up for the doubles against Marwan Faiz Khanjari and Azzan Marwan Amur. This proved to be the fastest match of the morning for the team, lasting just 36 minutes, going in the way of the Lankans 6/0, 6/0.

Sri Lanka will play Bahrain in their second play-off tie, today 5th March, at the Sri Lanka Tennis Association. Stay logged on to ThePapare.com for photos and results of the ongoing 2019 Asia/Oceania Pre-qualifying round of the Junior Davis Cup.