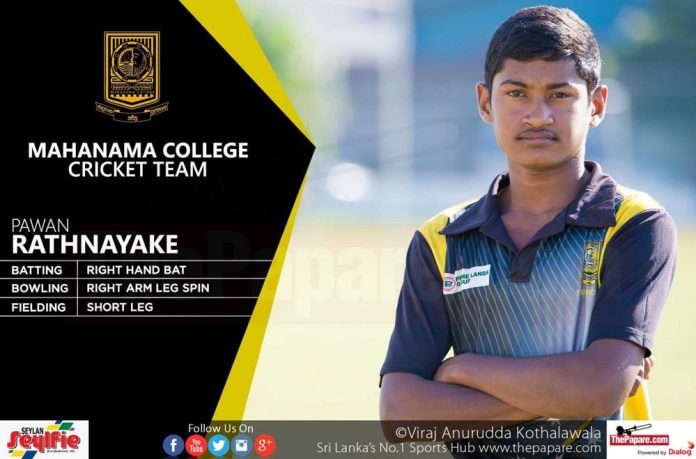 St. Thomas’ College, Matara played against St. Mary’s College, Kegalle on their traditional fixture yesterday (4th of October) and today (5th of October) at Uyanwatte Grounds, Matara. There were several other schools Under 19 games played all around the country too.

After winning the toss, St.Mary’s skipper invited the hosts to bat first. Accordingly, St. Thomas’ Matara posted 209 runs for the loss of 9 wickets on the board before declaring their innings. Harindu Jayasekara (62) and Nipun Ruchira (55*) scored fifties for St. Thomas’.

In reply, St. Mary’s were completely at sea as they lost 7 wickets for just 56 runs by the end of day one. Resuming on day two, they were eventually restricted for just 77 runs in 38.3 overs. Hirusha Jeewajith picked up 4 wickets for just 17 runs.

The boys from St. Thomas’ scored a quick 95 runs for the loss of 2 wickets and declared their second innings. Harindu Jayasekara scored an unbeaten 51.

The miseries of St.Mary’s seemed never-ending as they fell prey in the hands of St. Thomas’ meekly for just 98 runs once again.

Fifty plus scores from Ravindu Fernando (90) and Ashan Fernando (72) propelled Maris Stella to a comfortable 249 runs as they chose to bat after winning the toss. Thevindu Dickwella bowled brilliantly as picked up 3 wickets for just 4 runs.

Isipathana were uprooted for just 159 runs in their first innings in reply. Ravindu Rathnayaka scored the solitary fifty of the innings. Ravindu Fernando did enough damage with the ball too as he picked up 3 wickets for 46 runs.

Occupying the crease once again, the boys from Negombo added another 165 runs to their total for the loss of 3 wickets and declared their innings. Amantha Perera (58*) and Kevin Perera (55*) struck unbeaten fifties.

With a target of 255 runs, the boys from Isipathana Mawatha came out to bat. It was Ravindu yet again who put out a single-handed fight. He scored his second fifty of the match while Ravindu Fernando extended his wickets tally by another 3 as the match came to a draw.

In reply, Mahanama College scored 283 runs for the loss of 7 wickets and declared their innings. Pawan Rathnayake racked up a 113-runs in style for Mahanama. Vinuja Ranasinghe picked 4 wickets for 69 runs.

It was clearly about batting time for the Sebastianites when they came out to bat their second innings. It was called a day in the 13th over of their innings when they were at 44 for 1.

Dharmasoka takes advantage of a low-scoring draw against President’s Kotte.

President’s College, Kotte did not fall too far behind as they bowled Dharmasoka College, Ambalangoda out for 185 runs in Dharmasoka’s first innings. Sena Desai top-scored with 67 runs and Dinith Nelumdeniya picked 4 for 57.

In the second innings, President’s College, Kotte scored 197 runs for the loss of 9 wickets. Senan Kesara was the pick of the batsmen of the innings for his 63 runs while it was Lohan Aroshana once again with the ball. He picked up 3 wickets for 33 runs.

Zahira College, Colombo is hosting Royal College, Panadura on a traditional match today (5th of October) at Zahira College Grounds, Maradana. Winning the toss, Zahira College batted first and piled up a humongous first innings total of 358 runs for the loss of 6 wickets. Mohommad Rifath brought up an unbeaten hundred while the well-known Mohammad Shamaz missed out by 2 runs.

Royal Panadura were cornered by the end of the day at 14 for 4 in 17 overs. Imthiyaz Salasa accounted for all the wickets. Play will resume tomorrow (6th of October).

Aloysius Galle fell behind in the game as they were wrapped up for a shoddy 114 runs by the Peterites. Kaveesha Vilochana scored an unbeaten 33 runs while Ruvin Seneviratne picked up 3 wickets for 24 runs.

In reply, St. Peter’s were cruizing comfortably at 152 for 2 in 40 overs at close of play. Santhush Gunathike (66*) and Ranmith Jayasena (54*) are at the crease with fifty-plus scores.

The two teams met at the St. Benedict’s Grounds for their group A fixture today (5th of October). After winning the toss, St. Benedict’s College invited Gurukule to bat first. With the help of Nuwan Chanaka’s 62, Gurukule managed a 180-runs for their first innings. Vihanga Ruwanara bowled a superb spell as he ended the day with 3 wickets to his name and giving away just 1 run.

At the close of play, St. Benedicts were 23 for 2 in 8.1 overs. The play will resume tomorrow…

S. Thomas’ College won the toss and elected to field first in their traditional game against Dharmapala College, Pannipitiya.

Dharmapala College was restricted for just 103 runs in 46.5 overs by the Thomian bowlers. Umayanga Suwaris picked up 3 wickets for 21 runs.

In reply, the Thomians were at 201 for 5 at stumps. Umayanga Suwaris dominated the day with the bat too as he stayed overnight on 60 not out. Play will resume tomorrow for day 2…

Video – You can’t replicate facing Malinga, you have to face...

Video – Shanaka batting ahead of Dhananjaya was surprising – 2nd...