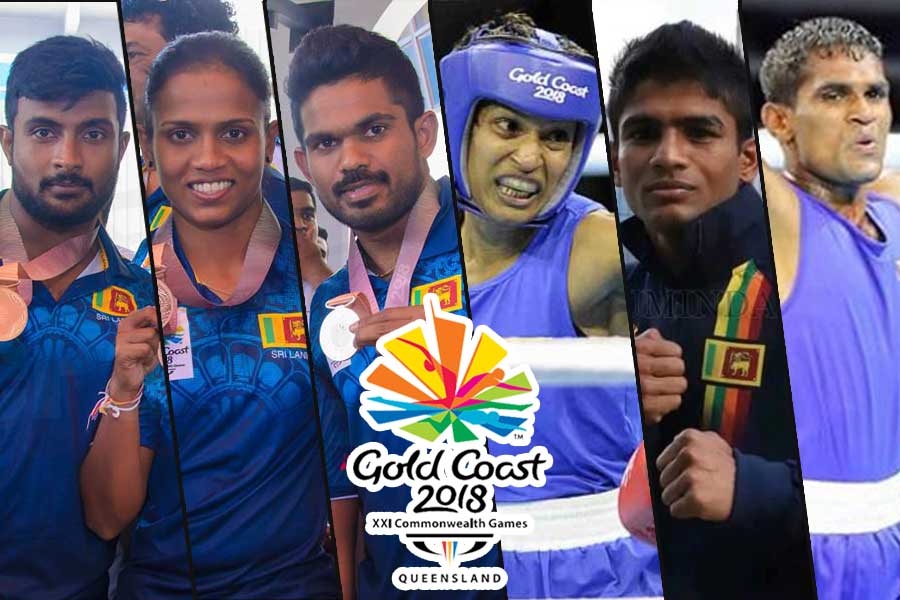 ‘Team Sri Lanka’ put up a gutsy performance in the 21st Commonwealth Games which was held from the 4th to 15th of April in Gold Coast, Australia.  Easily Sri Lanka’s most successful campaign in history, the medal tally stood at 6 while many achieved national records and personal bests giving the tiny islands’ sport some much-needed rejuvenation.

Sri Lanka’s best performance at a Commonwealth games previously was in 1950 in Auckland, New Zealand where they managed a total of 4 medals. A famous gold by Duncan White running the 440yards Hurdles, while Boxing grabbed 3 with K. Edwin bringing a Silver in flyweight, Albert Perera Silver in Bantamweight and Alex Obeysekara, Bronze in Welterweight.

In this sojourn, the Weightlifters performed best winning 3 medals (two silvers and a gold) while the Boxers too held their own winning 3 bronze medals. The 4 x 100 men’s relay team excited the nation bagging a spot in the final and the 4 x 100 Men’s Freestyle swimmers also astonished getting into the final alongside some big names.

Here is a look at the medal winners and the best performers from the Sri Lankan contingent who lifted our Islands name in the International arena. 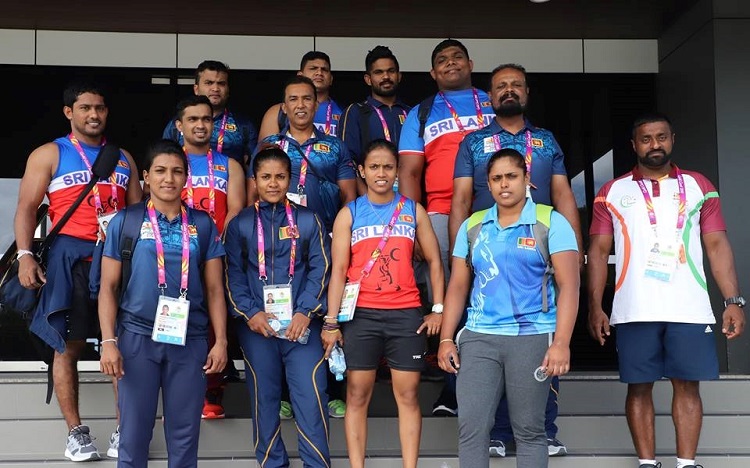 Undoubtedly the most successful Sri Lankan team at the 21St Commonwealth Games, the Weightlifters managed to bring home two Bronze medals and a Silver with three lifters narrowly missing out on medals.

Indika Dissanayake claimed Sri Lanka’s only Silver at the Gold Coast Games winning the medal in the Men’s 69kg Weight category. Indika totaled 297kg but was disappointed that he could not go for gold which was his training target.  He missed it by a couple of kilos. 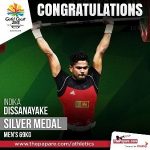 Chathuranga Lakmal cleared a total weight of 248kg to win the Bronze medal in the Men’s 56kg event. Chathuranga opened the medal count at the competition and was agonizingly close to the Silver medal,just short of a kilo of the second placed lifter. 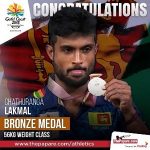 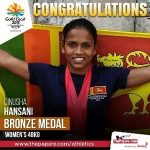 Apart from the medal winners, Thilanka Palangasinghe (4th place – Men’s 62kg), Chamari Warnakulasuriya (4th Place Women’s 53kg) and the Veteran Chinthana Vidanage (5th place Men’s77kg) all missed out on a medal not managing to complete their final lift in their respective competitions. Despite missing out on medals Thilanka Palangasinghe, Chamari Warnakulasuriya and Ushan Widanapathirana (Men’s 105+ kg) laid claim to the national record in their respective weight classes and Ushan Widanapathirana lifted the highest total weight ever lifted by a Sri Lankan clearing a total of 329kg.

Read – The team that lifted the weight of a nation

Sri Lankan boxers really did punch above their weight as they managed to end a 68-year boxing medal drought at the Commonwealth and won three Bronze medals in the competition. 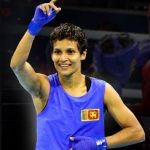 Thiwanka Ranasinghe won Bronze for Sri Lanka in the Men’s 46-49kg category. He secured the medal with a win against Berry Namri of Vanuatu but was defeated by Galal Yaffi in the semi-final. 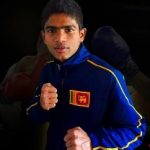 Ishan Bandara won Sri Lanka’s 3rd Boxing medal when he won his quarter-final bout against Charles Keama from Papua New Guinea. Bandara who is known for his knack for knocking out the opponents showed his capabilities in the opening round of his semi-final bout against Indian Gaurav Solanki in the final knocking him down twice but lost the bout 0-4 and had to be satisfied with a silver medal with the majority of the judges siding with the Indian. 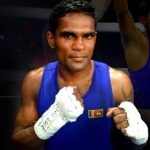 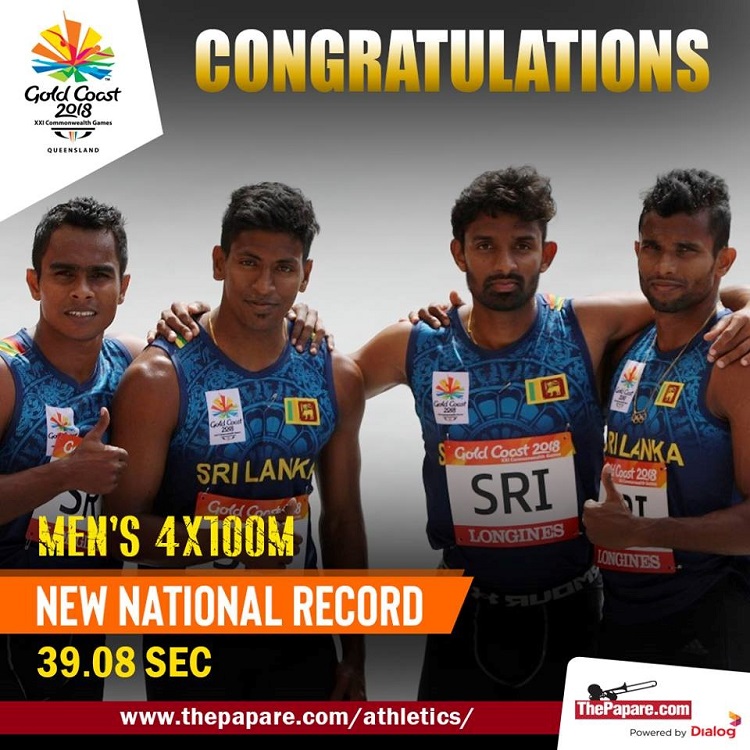 The Men’s 4X100 team entered the Commonwealth Games after a lap of 68 years, not much was expected from the Men’s 4X100m team. Despite not finishing in the podium, the Sri Lankan 4X100 men’s relay team turned a lot of heads when they entered the finals finishing third in their heats. Their best was to come in the final however, as the quartet of Himasha Eshan, Shehan Ambepitiya, Ashraff Ladiff and Vinoj Suranjaya sprinted their way into the final breaking their own record of 39.38secs and setting up a new national record clocking 39.08secs.  However, they were placed sixth in the final.

Long Jumper Prasad Wimalasiri was placed 7th in the Men’s Long Jump final with a jump measured at 7.89m, 0.3m short of his personal best time. Nadeeka Dilhani was placed 5th in the Women’s Javelin final with a throw of 56.02m.  Marathoner Hiruni Wijerathne clocked in a time of 2:49.38 which although was not her best performance earned her 11th placed finish and she was the only athlete from the Asian continent to finish.

The performances by the Athletics team are phenomenal especially since they did not have a proper training facility in Sri Lanka in the run up to the games with the Sugathadasa stadium still under construction and the track at Diyagama in a state where running on it exposed the athletes to injuries.  Now that the reconstruction work at the Sugathadasa Stadium is complete, it will be a huge boost to the athletes who will be targeting the upcoming Asian Games. 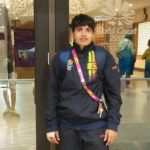 Deepika Dilhani, the only Sri Lankan female wrestler at the Gold Coast Games, impressed with a 4th place finish in the Women’s 53Kg weight category. In the Nordic rounds she got on to a fabulous start with a victory against Carissa Holland of Australia. 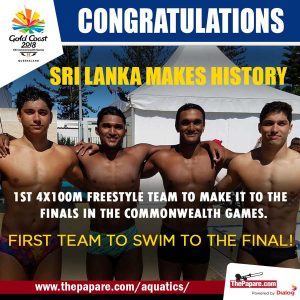 The first Men’s 4x100m freestyle relay team wrote history by entering the final as the first team to do so. The team comprised of Matthew Abeysinghe, Kyle Abeysinghe, Akalanka Peiris and Cherantha De Silva. Finishing 5th in their heat, they earned a direct entry to the final where they faced an unfortunate exit when an early charge from the final swimmer, Cherantha De Silva, saw the team being disqualified.

Read – Commonwealth Games: Swimmers off to the Final 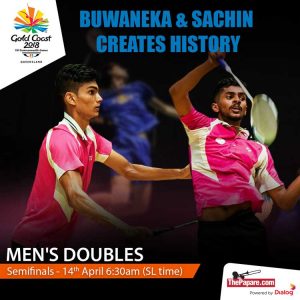 Dinuka Karunaratne grabbed a first-time quarterfinal entry in the Men’s singles. This is a career best for him in the Games having only reached the best of 16 in the previous years. Sachin Dias and Buwaneka Goonethilleka were the first ever Men’s Doubles pair to reach the semifinals in the games. Losing the semis, they faced tournament top seeds from Malaysia to play Sri Lanka’s first ever medal match in the games. (Bronze) They lost to the more experienced team. The most experienced campaigner, Niluka Karunaratne lost in the round of 16 to world number 2 Srikanth Kidambi of India.

Mihiliya Methsarani’s in her second attempt at the Commonwealth Games bettered her performance from last time reaching the Plate Final, eventually finishing plate runner-up with an overall standing of 18th.

It is heartening to see the stark improvement in performances from the contingent. Authorities must surely understand the potential of these athletes, some of whom compete with little or no resources.

ThePapare.com congratulates the performing athletes and implores all sports authorities to band together setting aside agenda’s, for the betterment of Sri Lankan sport.

Taniya Balasuriya – A name for the books

Who are the favourites?