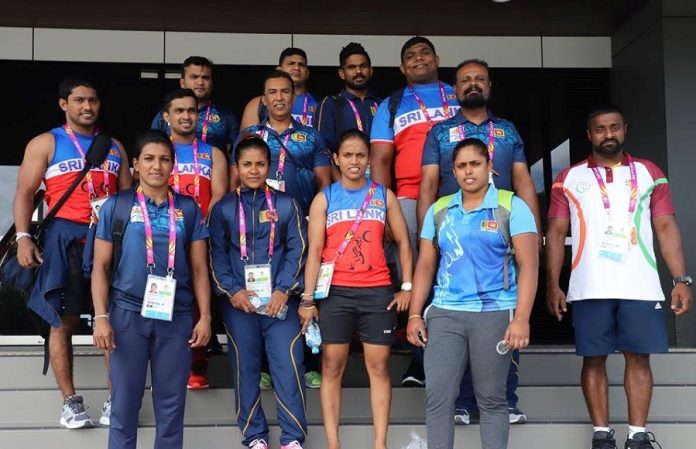 The Sri Lankan Weightlifting contingent that travelled to the 21st Commonwealth Games, returned to the island today having won 3 medals at the Games, including one Silver and two Bronze Medals.

Here’s a look at the impressive performances of the Weightlifting contingent.

Indika Dissanayake claimed Sri Lanka’s first Silver at the Gold Coast Games winning the Medal in the Men’s 69 Kg Weight Category. Indika totaled 297Kg but was disappointed that he could not go for gold as he had trained targeting the Gold medal and missed out by a couple of Kilos. 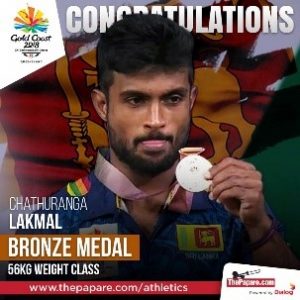 Sri Lanka Army Commando, Chathuranga Lakmal stayed true to his regiments motto ‘Nothing is Impossible’ and opened Sri Lanka’s medal count at the 21st Commonwealth Games winning Bronze in the Men’s 56Kg event. Lakmal cleared a total weight of 248Kg, snatching 114 Kg while lifting 134Kg in the ‘Clean and Jerk’. He unfortunately missed out on a deserving Silver by a solitary Kilo as the second placed Indian lifted a total weight of 249Kg. 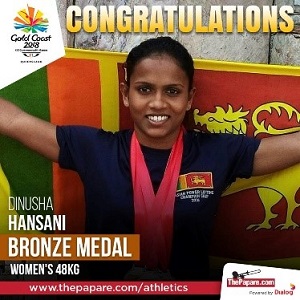 Dinusha Gomes, competing in the Women’s 48Kg event, made it a dream opening day for Sri Lanka as she managed to clinch the island’s second medal of the Games when she took the Bronze medal in her weight category. Dinusha cleared a total weight of 155kg to earn her medal.

So close yet so far for Thilanka

In what would have been an otherwise wonderful opening day for the weightlifting contingent of the country, Thilanka Wiraj unfortunately missed out on a medal in the Men’s 62Kg. Wiraj lifted a total of 297Kg and was 4 Kilos short of the bronze medal mark as his final attempt in the Clean and Jerk was futile. Perhaps the most amazing part of it all was that Thiwanka established new Snatch (124Kg), Clean and Jerk (155Kg) and Overall weight (297Kg) national records with his efforts and was just 1Kg short of the Gold Medal mark from 4 years ago, yet he finished medal-less.

Read – Commonwealth Games; Thilanka narrowly misses out on a medal

Heartbreak for Chamari after a spirited effort

Chamari Waranakulasuriya who competed in the Women’s 53Kg event put on a spirited show as she lifted an overall weight of 172Kg, a new national record in the Women’s 53Kg category, to be placed fourth in the competition and was unfortunate to have missed out on a medal. Emotional after the final ‘Clean and Jerk’ where she was unable to go past the Canadian lifter, strong willed Chamari had to be consoled by the coaching team.

Heartening performance from the Veteran 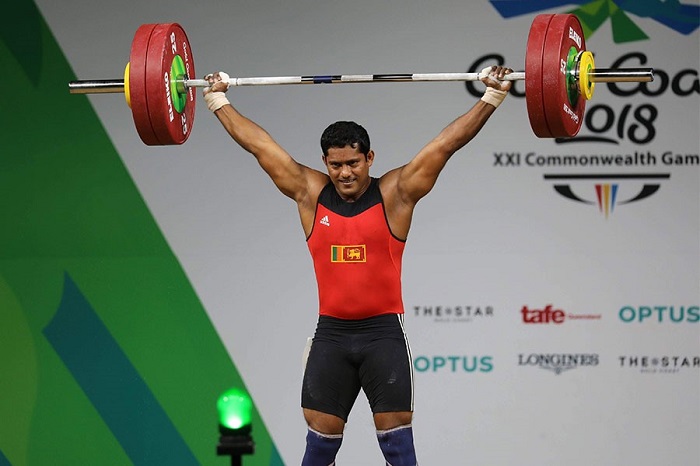 Chinthana Vidanage, Sri Lanka’s only Gold medal winning weightlifter in Commonwealth Games history and the most experienced campaigner in the team was placed 5th in the Men’s 77Kg. Chinthana, despite not ending up with a podium finish, was a vital cog in the wheels of the Sri Lankan Weight lifting team.

Isipathanian, Ushan Widanapathirane laid claim to three national records in the Snatch, ‘Clean and Jerk’ and the Highest overall weight lifted in the Over 105 kg category. Ushan lifted a total weight of 329Kg, noted as the highest mark achieved by a Sri Lankan lifter. The former Prop forward for the “Green Machine’ (Isipathana College 1st XV Rugby Team) showed great promise with his performance at one of the biggest events in the world. Ushan was placed 8th in his event.