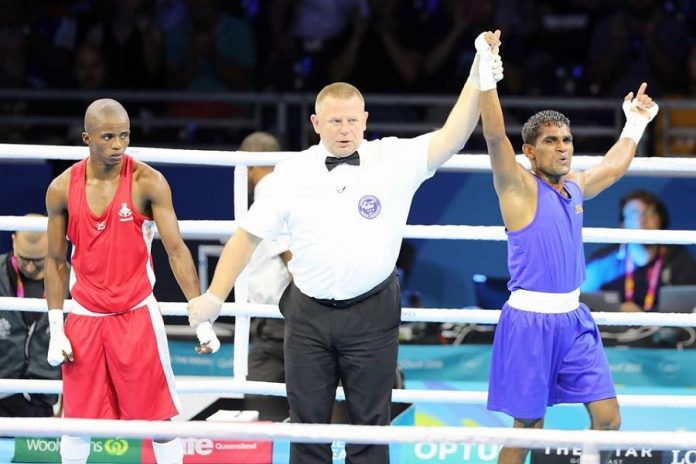 Sri Lanka is guaranteed of 6 medals so far at the 21st Commonwealth Games with Boxer Ishan Bandara, who competed in the Men’s 52 Kg today (11th), going through to the semi-final and securing a minimum of a Bronze medal finish for himself. 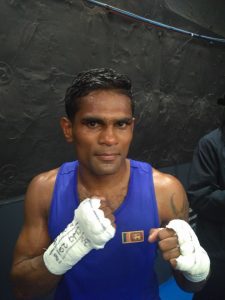 Ishan defeated Thabo Molefe of Lesotho in the quarterfinal bout earning a 4:1 majority from the judges. Ishan started with ferocious speed as he managed to knock down his opponent in the opening round which unsettled the fighter from Lesotho greatly. Molefe however staged a comeback in the second round showing some fire which prompted one of the judges to rule in favor of him. Ishan stayed composed during Molefe’s onslaught and unleashed his fury in the third round on the 19-year-old boxer from Lesotho to secure a medal finish.

26-year-old Ishan defeated Yachen Cook from Nauru in a very closely contested round of 16 fight where the judges ruled in favor of the Sri Lankan 3:2. Indika’s win in the quarterfinal has confirmed the third Boxing medal at the Gold Coast Games for Sri Lanka with Anusha Kodituwakku ending up with a Bronze after losing her semifinal fight to Indian Mary Kom.  Thiwanka Ranasinghe was guaranteed of a medal in the Men’s 46-49kg with his victory over Berry Namri of Vanuatu.

Indika Bandara will meet Indian Gaurav Solanki in the semi-final of the Men’s 52Kg category which will happen on the 13th of April at 0902hrs Sri Lankan time.

Keep it locked to www.thepapare.com as we will be bringing you comprehensive updates on the Sri Lankan contingent at the 21st Commonwealth Games.