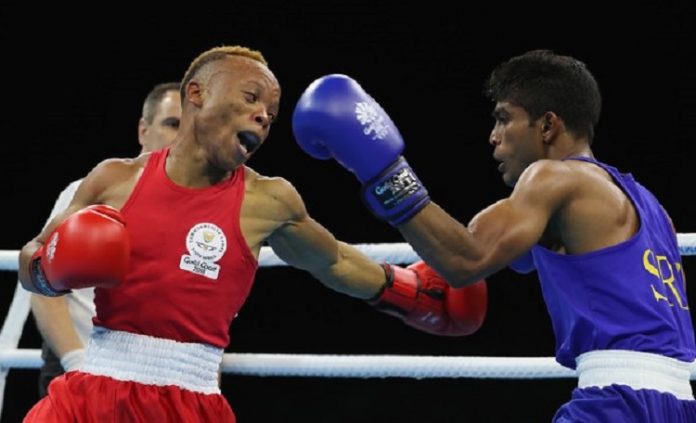 Boxer Thiwanka Ranasinghe, who is competing in the Men’s 46-49 Kg weight category, secured Sri Lanka’s 5th medal today (10th) at the 21st Commonwealth Games winning the quarterfinal bout against Berry Namri of Vanuatu 5-0 with all 5 judges ruling in favor of the Sri Lankan.

Ranasinghe’s victory earns him a place in the semifinal and also secures a minimum of a Bronze medal at the competition. Thiwanka ends a 68-year commonwealth boxing medal drought in the Men’s category, becoming the first male boxer to win a Commonwealth medal since Albert Perera’s Bantamweight Silver in the 1950 Commonwealth Games which was held in Auckland New Zealand.

Ranasinghe is certain of a Bronze as of now but should he advance to the final he will be able to compete for a Gold at the Games.

The former Vidyarthian boxer won his round of 16 bout against South African Siyabulela Mphongoshi on points 4-0 and carried his good form to the quarterfinal where he earned a clean majority winning the quarterfinal 5-0.

Both Ranasinghe and Namri started off their quarterfinal bout with a lot of pace and quite a number of body blows. Ranasinghe suffered a cut just above his left eyebrow which the referee deemed not dangerous, letting the fight continue. At the beginning of the second round the 19 year old Vanuatuan came out flying, with some fast paced blows which landed on the Sri Lankan. Ranasinghe however showcased his experience and stamina as he managed to dominate the proceedings in the third round with Namri showing since of fatigue which prompted the 5-0 decision of the judges to go in favor of Ranasinghe.

Thiwanka Ranasinghe will face Galal Yafai of England in the Semi Final of the Men’s 46-49kg on the 13th of April at 0830hrs Sri Lankan time.

Log onto www.ThePapare.com, Sri Lanka’s #1 Sports hub to be informed of his progress at the Commonwealth Games.