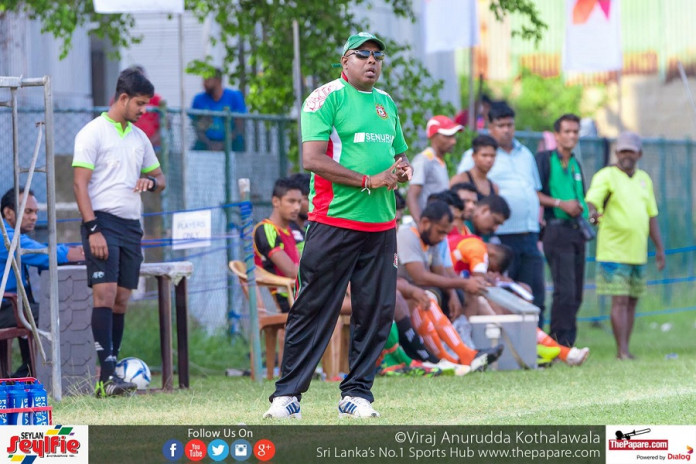 Head Coach of New Youngs FC Rohitha Fernando has requested the Football Federation of Sri Lanka (FFSL) to conduct a proper inquiry with regards to his three match suspension and fine.

Fernando was suspended for three matches and fined Rs.10,000 by the competitions committee due to his unprofessional conduct during the Dialog Champions League Super 8 encounter between New Youngs FC and Solid SC.

Rohitha Fernando, Head Coach of New Youngs FC has been suspended by the Football Federation of Sri Lanka (FFSL)..

In his letter to the FFSL which clearly shows his displeasure it reads;

“I am quite surprised to note the contents of your letter dated 9/2/17. Based on the reports of referees and the match commissioner the Competitions Committee had given me a 3 match suspension and imposed a fine of Rs.10,000/- for improper conduct at the above match.”

“Since the referee did not warn me or show me a card during the match, I totally deny these false charges and wonder how you could take action even without a proper inquiry.”

In an exclusive statement to ThePapare.com Rohitha Fernando further added,

“I was only told about the inquiry in the morning. It was supposed to be held in the afternoon. I have to travel from Wennapuwa and I didn’t have time to attend.”

The letter further goes onto state,

“In this connection I wish to state that I have informed the Federation many a times not to appoint referee Mr.Udayakantha for our matches with Solid SC as we felt that his decisions at these matches was always in favour of Solid SC. In fact even before the above mentioned match I informed the CEO of FFSL not to appoint him for this match.

We spend millions of rupees to maintain and upkeep our Club and team and we had no incidents in our matches in the Champions League. Decisions of this nature taken against us on false allegations are merely to demoralize and put us down.”

“I earnestly request the Competition Committee to kindly conduct a proper inquiry into this matter failing which I will be compelled to take alternative and necessary steps to prove my innocence and clear my name against these false charges and obtain relief.”