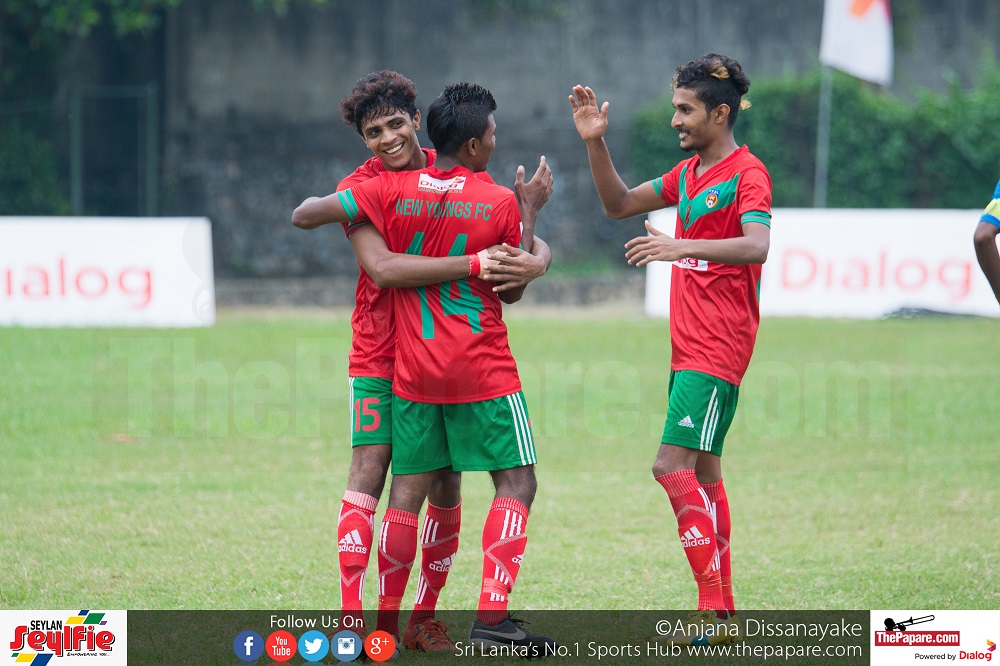 New Youngs FC recorded their first win in the 2016 Dialog Champions League Super 8 with a commanding 4-1 win against Navy SC in the 7th and final week of the competition at the Kelaniya Football Complex.

Coming into the match New Youngs were desperately in search of their first win after a 5-0 hammering from Army in the previous week while Navy were on the back of a 2-1 loss to title contenders Renown SC.

The first half was dominated by New Youngs with possession and chances against a disorganized Navy outfit. However the lads from Wennapuwa were unable to take early advantage of the sustained pressure on the Navy defence.

Army thump New Youngs in a second half rampage

Army SC hammered in a five star performance to win by a 5-0 score-line against New Youngs SC in a DCL Super 8..

It was only in the 21st minute that New Youngs broke through as a blistering shot from Foster Amaadi was no match to a weak punch from Imesh Fernando in goal for Navy to give New Youngs the lead.

Navy made a substitution to replace Nirmal Wijethunga with Nalaka Roshan towards the end of the first half which almost paid dividends.

Soon after coming on, Nalaka Roshan was fouled on the edge of the box and his dangerous free-kick was flicked onto the crossbar by Kaveesh Fernando. The resulting rebound from point blank range was shot straight at the goalkeeper.

On the stroke of half time Roshan was once again involved when he got on the end of a through ball from Chathuranga Sanjeewa but his effort was saved by the goalkeeper.

Two minutes into the 2nd half, stand-in skipper Mohamed Fawzan made it 2-0 for New Youngs heading into an empty goal after goalkeeper and Tharindu Eranga clashed trying to clear a cross from the right.

Two minutes after the 2nd, New Youngs made it 3-0 as Sudath Jayalath chipped it over the goalkeeper after another error from Fernando.

A game which was billed to be the last banana peel in Renown’s way before their potentially title deciding clash against Colombo FC in the final game weeK..

Navy pegged one goal back in the 58th minute when Chameera Krishantha drilled home from close range but there was no Navy comeback as Hasitha Priyankara scored the 4th in the 78th minute finishing off a blistering counter attack with another chip over the goalkeeper.

Kaveesh Fernando made a good save off Nalaka Roshan after getting an awkward bounce but there was no telling support coming from the rest of the Navy players except for Chathuranga Sanjeewa who had a tireless game as always.