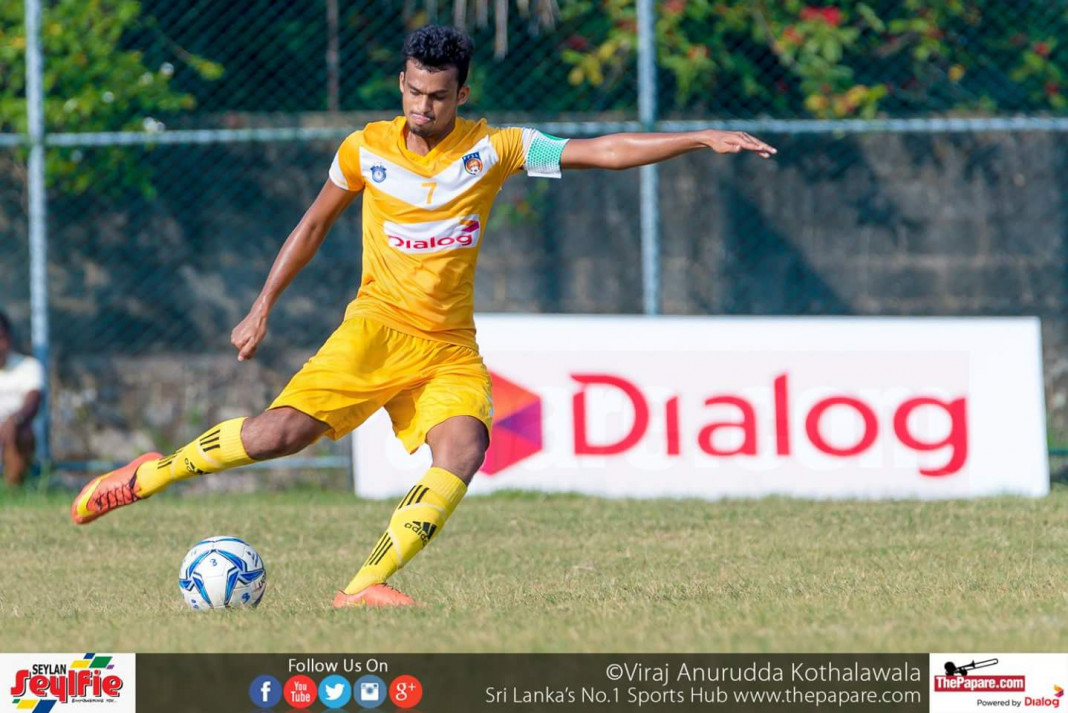 A game which was billed to be the last banana peel in Renown SC’s way before their potentially title deciding clash against Colombo FC in the final game week, nearly proved to be just that as Renown were forced to work hard for a 2-1 comeback win against a determined Navy SC at the Kelaniya Football Complex.

Both teams took their time to settle in to the game with Renown looking to play more through the middle whilst Navy tried to stretch the play and shift the ball to the wings.

Renown soon had the ball in the back of the net midway through the first half courtesy of Job Michael, but the whistle had gone for offside to let Navy off the hook.

Navy slowly started to dominate the game due to some good work in central midfield from Maduranga Perera and Chathuranga Sanjeewa, who denied the dangerous Renown midfield any time and space on the ball.

Dammika Ratnayake then created their first clear cut chance courtesy of a wonderful cross from the left that evaded the Renown defence, but unfortunately for him, a diving Krishantha Perera could not direct his header towards the goal.

Ratnayake did get his assist a few minutes later as a wonderful cut back from the byline saw Jeran Fernando bundle the ball home from point blank range to give Navy a well-deserved lead.

Renown improved a great deal in the second half and were able to get Job Michael more involved in the game which eventually saw them draw level within 10 minutes of the restart.

A move initiated by Mohamed Rifnaz deep inside the Renown half was turned home by the skipper himself after some good hold up play from Job Michael.

After a scrappy period of play Renown went in front when Job Michael was played through on goal. He hit his effort straight at Udayanga Reginold but was lucky to get a second chance when the parry fell at his feet, and made no mistake the second time around.

Renown grind out a hard-fought win over Air Force

Renown SC recorded another important win against Air Force SC in the Super 8 stage of the Dialog Champions Legaue..

Navy did have chances of their own to equalize but could not convert them, with a brilliant long range lob from Chathuranga Sanjeewa landing on the wrong side of the crossbar and a Chalana Chameera free kick from just outside the box being fired over the bar, failing to test the goalkeeper.

Renown held on for a narrow win, but the competitive nature of the match saw both Mohamed Rizkhan and Mohamed Mujeeb pick up yellow cards which will leave Mujeeb suspended for the all-important clash against Colombo FC next week.

Speaking to ThePapare.com after the game Mohamed Amanullah coach of Renown had this to say;

“We had some chances early on but could not convert them and if we had done so, it would have been a lot easier. I think we may have been a bit too relaxed going into the clash and that put us under pressure, especially after they scored. We have overturned deficits before but at half time I was a bit stern with the team and that brought the reaction I was hoping for and we played a lot better in the second half. Mujeeb will miss the important game next week, but we have some time to work a good replacement into the team so hopefully it will not be too big a loss.”

Navy coach Dhammika Athukorala had this to say following the narrow loss;

“We played well today, but we made a few mistakes in the second half which cost us defensively, and we failed to convert the opportunities that came our way at the other end of the pitch. It’s always a 50-50 game whenever Renown play Navy, I think it always comes down to who makes less mistakes on the day.”