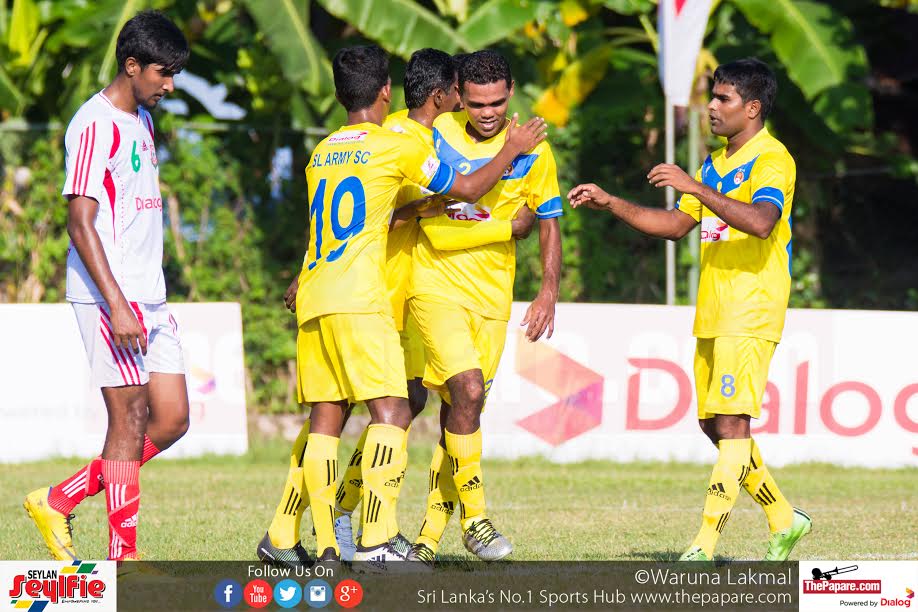 Army SC hammered in a five star performance to win by a 5-0 score-line against New Youngs SC in a Dialog Champions League Super 8 clash worked off at the Kelaniya football complex today.

It was a scrappy start from both teams as the lack of championship weight showed in both teams from kick off.

However, a brisk move from the New Youngs which eventually saw Foster Amaadi set up a shot for Mohomed Fauzan just outside the box. Replacement keeper Mohomed Ajmal was called into action as Fauzan made a sweet connection only to be denied by the acrobatics of the Army custodian.

Army sprung into life soon after despite a surprise first half substitution was made with the likes of Nadeeka Pushpakumara being replaced by Suraj Bernard.

Army managed to pile on consistent pressure from both sides of the field as a set piece saw the New Youngs’ undoing with Sanka Danushka volleying an absolutely sensational goal from about 25 yards out.

Despite New Youngs’ surging forward with the likes of Hasitha Priyankara, Foster Amaadi and Mohomed Fauzan it were the Soldiers who had yet another priceless opening as Suraj Bernard found veteran Mohomed Issadeen who ran around his opposition keeper only to see his shot being cleared off the line by Madushanka Karunaratne.

Sajith Kumara made an acrobatic attempt during the dying stages of the half only to see his shot sail over the crossbar as the referee blew the whistle for lemons bringing to an end to an enthralling last twenty minutes.

Army set out to kill the game in the second half as they started at an electrifying pace. It took them a mere two minutes to double their lead as Sajith Kumara toe poked his timid effort to find the inside of the goal.

It took him another four more minutes to score his brace as yet another lightning counter resulted in Sajith Kumara tapping in his skipper Madushan De Silva’s cross from the right.

The 3 rd match of DCL Super 8 Week 03 between New Youngs FC and Solid SC ended in a 1 – 1 draw in the match held at the Kelaniya Football Complex.

Army went onto pile more misery on their depleted opponents as two second half substitutes in Thivanka Chandrasekara and Mohomed Rimzan added a fourth and fifth respectively to complete an absolute route.

Sanka Danushka was the stand out for the Soldiers in a five star performance as his relentless running throughout the 90 minutes proved to be the difference between the sides in the pivotal midfield battle.

Speaking to ThePapare.com the coach of Army SC Mohomed Fawmy;

“I’m happy with the final outcome but not the final score because I believe we could have easily scored a few more goals today. I constantly wanted them to quicken the pace of the game without playing at the pace of our opponents (New Youngs SC)”

Having asked about the early Nadeeka Pushpakumara substitution “Nadeeka didn’t play to my plan so I decided there was a change required there and Suraj filled in well and combined nicely with Sanka. The second half substitutions of Issadeen and Thiruna too was the done due to the same reason.”

“We weren’t willing to play today due to various suspensions brought upon us during our last game. We were under prepared for the game today, which reflected in the result of the match.”