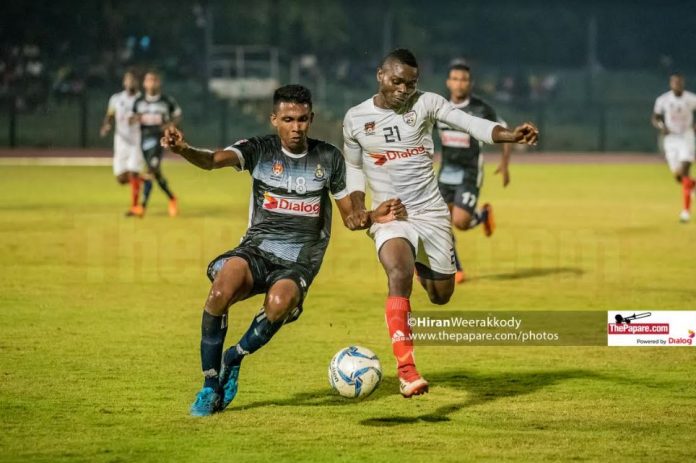 Red Stars starting in 5th position on the league table, were not happy at kick off as the home venue was changed to Colombo at the eleventh hour. SL Air Force lying in 12th spot and not having the best of seasons so far, looked to take advantage of the venue change.

An early save by goalkeeper Ruwan Arunasiri sparked off the game as Red Stars went on the offensive. Shanaka Wijesena then rattled the Red Stars cross bar after Kavindu Ishan won a free kick close to the box.

10 minutes on Arunasiri was called in once again to save from J. Dilakshan as he was one on one against  the striker after a brilliant run and pass from S.D Wijesinghe.

Chaminka Dilhara was sent off with a direct red card as he brought down Ismail Abu who was through on goal. As the last defender he was rightly sent off by referee Tharanga.

Stepping up to take the free kick Idowu Hameed hit the cross bar as the ball bounced on the line. Air Force managed to clear the ball from a dangerous position.

Red Stars kept on pressing with the numerical advantage and looked to attack with every move. Air Force did well to thwart any attacks but they were not able to send out too many on the attack themselves.

Against the run of play, Kavindu Ishan smashed home a curling free kick from the top of the box to give Air Force the lead.

The second half too was the same as the first, as Red Stars started positively and Air Force looked to counter. Kavindu Ishan got the first chance of the second half but his effort went wide off the right upright.

Dilakshan then hit the upright as he beat keeper Arunasiri after a long ball to the left wing; the second time Red Stars were denied by the metal.

Afonja Jibola was next to meet Arunasiri as a well directed header with power towards the goal was easily saved by the Air Force keeper as Red Stars were constantly peppering the wings with crosses.

Air Force started playing smartly as Red stars chased the game. Jibola sent in a teasing ball towards the penalty area from the left which was cleared away by the stout Air Force defense.

Mohamed Nusky came close to score for Red Stars with a long range effort which sailed inches over the cross bar.

Red Stars were third time unlucky as Jibola once again hit the woodwork with a swerving hit from the right wing after he found space up front.

The last 10 minutes saw some frantic attacking play by Red Stars who kept on pushing for an equalizer. Air Force knowing they are a man down and a goal up slowed down the pace of the game to great effect.