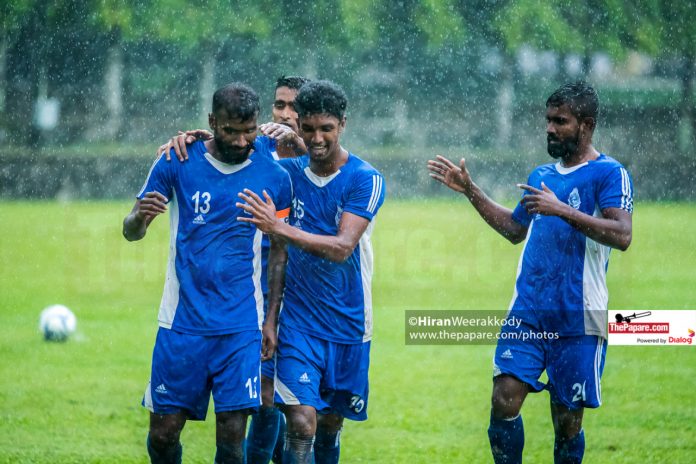 Navy Sea Hawks FC dominated and came out 3-0 winners against Solid SC in their week 08 fixture of the Dialog Champions League 2018, played at the Navy Grounds, Welisara.

Navy Sea Hawks came into this game in 5th place with 14 points while Solid were in 15th with just 5 points.

The game got off to quite the even start with both sides breaking into the opposition box, but neither team were able to capitalize. As the half progressed however it was the Sea Hawks who dominated play, creating numerous chances throughout the half.

Their first major opportunity came when Nalaka Roshan got the ball off a defensive error and was 1 on 1 against the goalkeeper, but Solid’s B.D.T.L. Jayasinghe recovered brilliantly to put in a last ditch intervention to block the shot at the expense of a corner.

Sea Hawks then won a free-kick right on the side of the opposition box, which Roshan struck well into the box, but the header by skipper Chathuranga Sanjeewa could not be directed on target.

Navy again came close when a corner struck into the box was met with a header, but yet again they could not direct it goal-wards. The chances kept coming for the Sea Hawks but they kept failing to get the telling touch.

The boys from Anuradhapura were wasteful with their set-piece opportunities, as they squandered a number of corner kicks and free-kicks without even threatening the opposition goal.

Solid’s final opportunity of the half came after a shot by their forward was pushed away for a corner by goalkeeper Sachintha Reginold. Winson Geethan struck in a shot from the resulting corner, but it was blocked off the line.

Sea Hawks opened the scoring minutes into the second half when a free-kick from range was struck directly into the corner of the goal by Roshan to give the sailors the advantage.

The sailors then came close again twice in quick succession; first when a strike was well saved by the Solid keeper, before their forward took a volleyed attempt towards goal, but missed by inches.

The Sailors doubled their advantage in the 62nd minute when a strike by Captain Sanjeewa had the Solid keeper completely beaten.

Solid had the chance to pull one back when they were awarded a free-kick in a dangerous area. Edison Figurado struck it well, but a diving Reginold saw it pushed out for a corner.

Solid were then handed a lifeline when their forward was cut down inside the box and the referee pointed straight to the spot. Figurado stepped up to pull his side one back, but after a stuttering run-up he struck it poorly straight to Reginold who complied with a simple save.

Sea Hawks won a free-kick in a dangerous position towards the end of the game which was struck powerfully by Mohamed Shaheel, but the goalkeeper pulled off a stunning save to deny the sailors.

It was short lived however when in the 85th minute, Roshan laid the ball off to Mohamed Asmeer, who thumped the ball into the back of the net to make it 3-0 to the Sea Hawks.