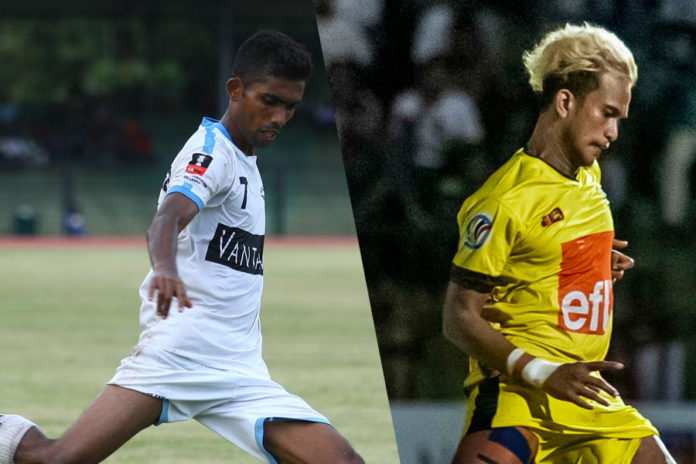 Blue Eagles and Colombo qualified for the finals of the Vantage FFSL President’s Cup 2020 recording hard-fought victories over Java Lane and Red Stars respectively, via penalty shootouts at the Sugathadasa Stadium.

Blue Eagles emerged victorious over Java Lane 4-3 on penalties in the first semi-final after the match ended 2-2 in a closely contested encounter.

Blue Eagles kicked off the game with their attacking shoes on, scoring twice in the first 12 minutes of the game courtesy of goals from Nethma Malshan and Kavindu Ishan respectively.

Although both teams missed out on a plethora of goalscoring opportunities in the remainder of the first-half, Java Lane got themselves back in the game at the start of second-half with Malaka Perera finding the back of the net through a penalty.

Chances went abegging at both ends of the pitch in the second-half as well. When it seemed as if Blue Eagles would hold their lead it was Jude Naveen that turned out for Java Lane putting the ball back in the net with just a few minutes left on the clock to equalize and force a penalty shootout.

Java Lane’s 3rd and 5th penalties taken by Mohamed Abdulla and Francis Chikebura respectively went out of the target, whereas, although Chathuranga Fernando missed the first Blue Eagles penalty they held their nerve to score the next 4 and reserve their place in the finals.

Colombo FC secured their spot in the finals defeating Red Stars 3-2 on penalties after the game concluded 2-2 at the end of regulation time.

Colombo qualified for the semi-finals recording a dominant 3-0 victory over Police in the quarters, while Red Stars made their way into this match defeating Serendib 5-3 in what was an enthralling game of football.

It was the lads from Colombo that found their feet early on with Shabeer Razooniya and Mohamed Aakib scoring goals in the 13th and 22nd minutes handing their team a 2-goal cushion over the opposition.

They kept the momentum going and eventually was rewarded with the equalizer in the 73rd minute with Rahman delivering a beautiful ball into the box from a free-kick for an unmarked Dananjaya Wijesinghe to easily head it home.

Red Stars skipper Mohamed Ramees was sent off for a second bookable offence but they held on to force the game into a penalty shootout.

The 2nd to 4th penalties of Red Stars were failed attempts with 2 of them hitting the woodwork and the other sailing over the crossbar. Colombo FC managed to absorb the pressure and score their final 3 penalties to clinch the win 3-2 on penalties despite Mohamed Fazal and Rawme Mohideen missing the first 2 spot kicks.