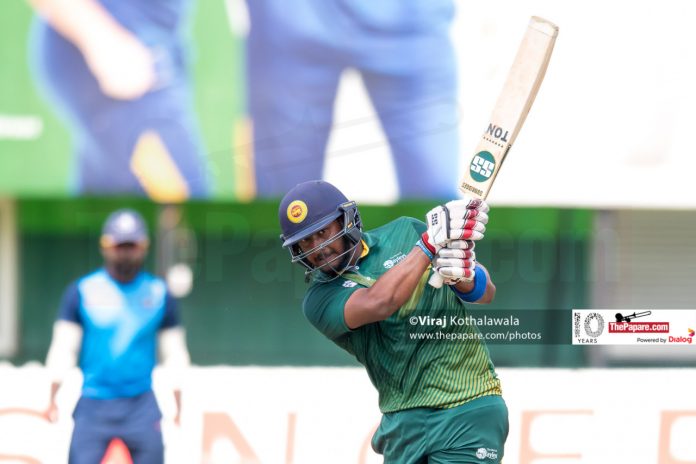 The SLC Emerging team found runs scoring hard during their turn to bat, as they mustered only 146/8 batting first.

Wicket-keeper batsman Vishad Randika could not find the boundary as often as he would have liked to but managed to top score with 46 runs. Soldier Dushan Vimukthi looked fluent in his knock of 34, while Nimanda Subasinghe chipped in with 22 runs.

Lahiru Samarakoon, who shone with the bat a few days back against JKH, produced the goods this time with the ball capturing four wickets. Left-arm spinner Chathuranga de Silva also bowled impressively picking up two wickets, while conceding just 14 runs off his four overs.

Samarakoon fell early in the run chase, but Avishka Fernando took the SLC Emerging bowlers to the cleaners as he made an unbeaten 92* off just 52 balls. His knock included six towering sixes while he also found the boundary on seven other occasions.

Ron Chandraguptha gave him good company with a more composed knock, as he remained unbeaten on 39* off 41 balls to get Hayleys home in the 17th over.

Hayleys will meet MAS Unichela in the grand finale of the tournament tomorrow (26) at the MCA grounds in Colombo. The live-action of the final will be available on ThePapare.com from 9.45 am onwards.

Video – Can Sri Lanka register consecutive whitewashes in the...