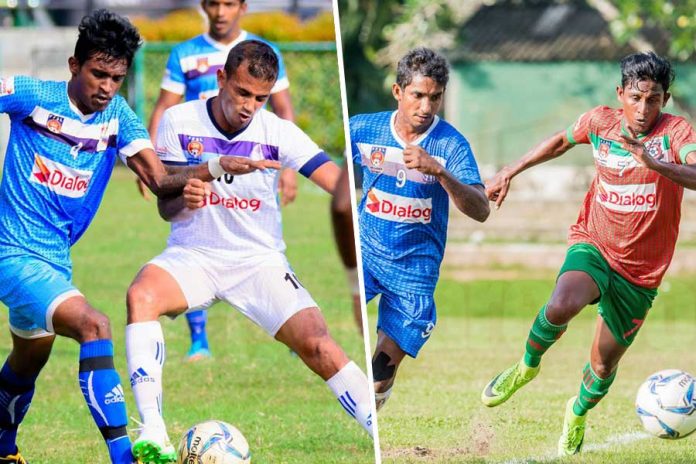 In an uneventful first half both teams had equal possession in the opening 45 minutes, yet every time Navy SC tried to go on the attack, due to poor passing and ball retention it was quickly won back by the New Youngs.

The scheduled matches of the Dialog Champions League were..

New Youngs get a few good crosses into the opposition box but were unable to find a target at the end of them. The poor ground conditions came into play on a few occasions as many players ended up stumbling and slipping.

The second half once again did not provide much action. However, the best chance came around the hour mark with New Youngs’ Hasitha Priyankara getting a good cross into the box but it ended up being blasted over the bar by the forward.

Nirmal Wijethunga, who did not have a good game and lost the ball on a few occasions much to the displeasure of his coach, was replaced by Maduranga Perera. Navy SC were more attacking than in the first half but New Youngs’ defenders held strong and managed to clear the danger when it came.

In stoppage time, New Youngs once again got a golden opportunity to break the deadlock and snatch a dramatic late winner but the forward hit the crossbar before the ball was cleared away by defenders.

The loss meant Crystal Palace fell deeper into the relegation battle, three places from the bottom on 12 points, while Matara City continued their impressive rise after a miserable 2016, now in 6th place with 23 points.

Brayan Weerappuli opened the scoring in the 12th minute and B.Prince added another two before half time.

Prince completed his hat-trick soon after half time as the hosts raced to a dominant victory.

However, Lions who started the match in the bottom two still finds themselves in the same position as the results elsewhere did not go their way.

Emma scored inside the first ten minutes for the Lions before quick goals from J.Kowfie and P.M.S.Priyankara saw the hosts go into half time with a 2-1 lead.

Amith Kumara scored an own goal and Emma re-took the lead for the Lions in the 77th minute, setting up an intense final 15-minutes. Kwofie once again equalized with 5 minutes remaining but Emma’s winner in the 90th minute set about wild celebrations.

Moragasmulla & Police battling in the bottom half of the table earned a point each after an entertaining 2-2 draw at the Janaka Ranawaka Stadium, Moragasmulla.

The results do not help Moragasmulla’s woes as they still find themselves bottom of the table in 18th place, 5 points behind the Lions in 17th place.

H.G.Priyawansa scored in the 6th minute but Nuwan Priyankara equalized for Police minutes later. Chathura Gunarathna gave Police the lead on the stroke of half time (45+2). After half time, Dilan Madushanka equalized for the hosts in the 75th minute.

A day after getting married, Mohamed Rifnaz produced an…

The winner from Priyankara Silva in the 67th minute meant that the lads from Negombo, earned a vital three points in the relegation battle while Blue Star got sucked into the 7-team relegation scrap. Abhu John from Blue Star got a yellow card.

Solid SC and Army SC played out a 1-1 draw at the Public Grounds, Anuradhapura.

Neither side could score in the first half and it was the skipper Gnanaruban Vinoth who broke the deadlock for Solid in the 57th minute and Asikur Rahuman equalized in the 76th minute.

Amartey Emma scored a first half double as the Up Country..